So, can we say the marketing cycle for Rewrite is getting a rewrite, itself?

Rewrite is based on Key’s visual novel of the same name. Motoki “Tensho” Tanaka (The Fruit of Grisaia, Kinmoza! Kiniro + Mosaic) will direct the season and take charge of script supervision at studio 8 Bit. Masayuki Nonaka will provide character designs on the project. The team of Takashi Aoshima and Tatsuya Takahashi are collaborating on the season’s scripts. 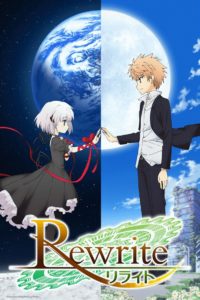 Crunchyroll will stream Rewrite‘s second season as part of their Winter 2017 simulcast lineup. The describe the upcoming cour as: