So, can we say this news fails to disappoint?

Earlier today, Sentai Filmworks took to Twitter to tease a new anime dub. A short video, which has the caption of “Well, it’s official!”, confirms that Sentai is producing a dub for Chivalry of a Failed Knight (Rakudai Kishi no Cavalry). The video reveals that Christopher Ayres will direct the adaptation. 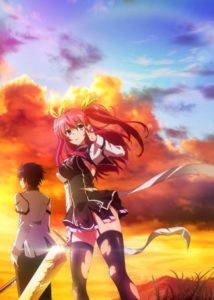 Shin Oonuma (Baka and Test, Watamote) directed the series, with Jin Tamamura filling the role of Series Director. Character designs were provided by Sei Komatsubara. Shogo Yasukawa (Food Wars! Shokugeki no Soma, Terraformars) is handling the show’s composition, and Jin Aketagawa was in charge of sound direction. The actual animation was provided by the two-studio team of Silver Link and Nexus.

Sentai Filmworks describes Chivalry of a Failed Knight as: