Love Live! Sunshine!! is the latest entry in the Love Live! School Idol Project franchise. Kazuo Sakai (Mushi-Uta) directed the project, which aired in the Summer 2016 broadcast season, at Sunrise. Yūhei Murota and Jukki Hanada both reprised their roles on the project as character designer and series composition, respectively. 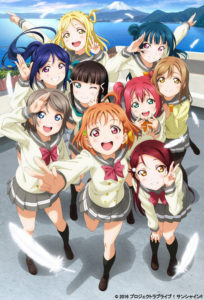 Funimation currently holds the domestic rights to Love Live! Sunshine!! They describe the show as: