Long time readers of mine know how much of a soft spot I have in my heart for the Sailor Moon franchise, as it was one of the first things that I experienced on my way towards becoming the anime and manga fan that I am today. This is why I am feeling extreme amounts of ennui towards this particular piece of news.

Earlier today, it was announced that in August there will be a special Sailor Moon themed concert. The show will be led by conductor Makoto Yoshida and the Tokyo Philharmonic Orchestra, along with special guests throughout the night. The concert will take place on August 2nd and 3rd and promises that if it appeared within any part of the Sailor Moon universe, it’s possible that it will be played at the concert. The concert series is part of the ongoing 25th anniversary celebration of the famous magical girl franchise. 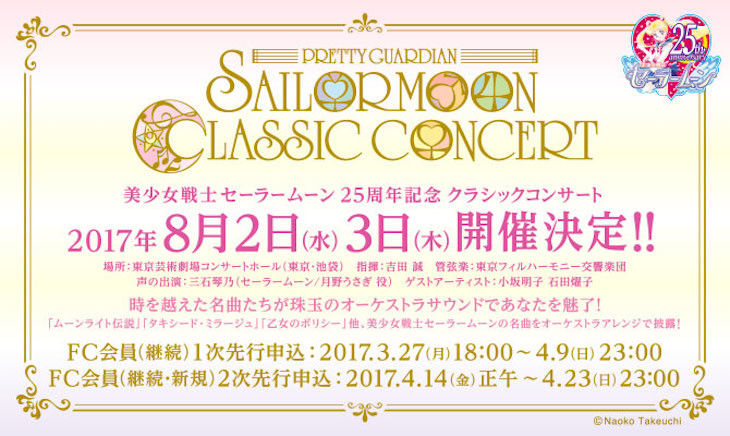 Tickets will go on sale in three stages. The first two stages, which are being held from March 27th to April 9th and April 14th to April 23rd, are only open to members of the Sailor Moon fan club. If there are any tickets left after that, they will be made available to the general public starting on June 3rd.

It doesn’t matter if you’re a fan of magical girls or not, anyone who considers themselves an anime or manga fan have to marvel at the impact that this series left on fans all over the world over the last quarter century. I’m already imagining that many tears will be shed by audience members at these concerts as they are taken on trip to Nostalgia-ville.