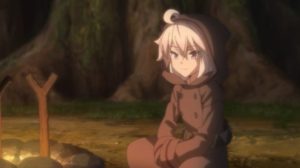 Sometimes, while glancing at the upcoming anime season chart, you come across a title that just jumps out at you and makes you super intrigued to learn more about it. For the Spring 2017 season, that series for me is Zero Kara Hajimeru Maho no Sho (Grimoire of Zero). Based off the light novels of the same name, this anime series produced by White Fox (Akame ga Kill, The Devil Is A Part-Timer, Re: Zero) follows a witch named Zero who know nothing of the world traveling with a mercenary who is half man and half beast.

Sounds at least a little interesting, right? Well, if you still need some more pushing towards that line of thinking here is the third promotional video which was just released this morning:

Premiering on April 11th, the series will feature Yumiri Hanamori (Anne in Anne-Happy) as the witch Zero and Tsuyoshi Koyama (Kurou in Utawarerumono) as the unnamed mercenary.

Are you sufficiently pumped for this series? I know I am!