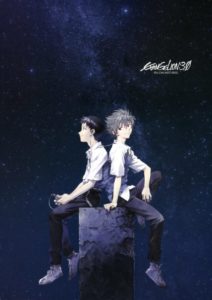 It looks like the cruel angel’s thesis will be completed again, after all.

Applications must be received by early June, and positions will be filled as qualified candidates are selected.

Earlier this month, Khara revealed that Shin Evangelion Gekijo-ban :||, the final chapter in the Rebuild of Evangelion films, is in the works. As of press time, though, details on a release have yet to be confirmed.

First of all, I’d like to apologize. I’ve kept you waiting for the new Evangelion for a very, very long time. I am truly sorry. […] Evangelion can best be described as my soul; it is a work that chips off parts of me. The previous work, Evangelion: 3.0 You Can (Not) Redo (Evangelion Shin Gekijoban: Q), wore me down until I wasn’t able to make anything anymore.

Funimation currently holds the domestic rights to the first three Evangelion films. The company released Evangelion 3.33 on February 2, 2016, following a cooperative rewrite of the dub script with Khara.