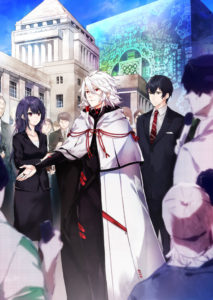 So, what answer is the right answer? That’s a question that’s baffled philosophers for ages.

Last night, Funimation unveiled the English dub cast for KADO: The Right Answer. The series will star the following:

KADO: The Right Answer is an original series from Toei Animation. Kazuya Murata (Fullmetal Alchemist: The Sacred Star of Milos, Gargantia on the Verdurous Planet) is directing the project, which features character designs by Ako Arisaka. Mado Nozaki is writin the show’s scripts.

The fate of the world lies in the hands of one negotiator when a commercial jet is abducted into a massive unknown structure. Inside, a strange being appears claiming he will intervene in Japan’s internal affairs. That’s when Shindou Kojirou, a Japanese official on board the plane, steps forth to greet him, spearheading the communications that will dictate the future of mankind.