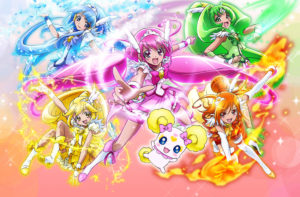 I guess Glitter Force is here to stay, albeit in a different way.

As of May 24, Saban Brands’ trademark for Glitter Force no longer belongs to them. The brand has since been transferred to Toei Animation.

Glitter Force is an adaptation of magical girl series Smile PreCure!. The series, which was promoted by Saban from 2012 – 2013, made its début as a “Netflix Original” in December 2014. Two twenty-episode seasons were released on Netflix, with the most recent batch hitting on August 26, 2016.

The most recent entry in the Precure franchise, Kirakira ☆ Precure a la Mode, made its début on Japanese TV on February 5. The series will receive a theatrical film, which opens in October.