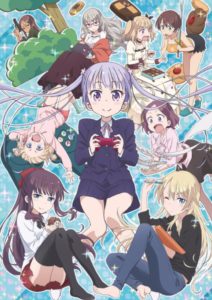 The members of Eagle Jump are ready to kick butt and make software… and they’re all out of butts to kick.

Clifford Chapin is taking charge as lead ADR Director, and will direct episodes 1, 2, 4, 6, 8, 10, and 12. Caitlin Glass will direct the remaining episodes. Brittany Lauda will serve as assistant ADR Director, while the Matt Shipman and Nikki Shults write the scripts. The team of Jamal Roberson, Matt Grounds, and Manuel Aragon will serve as ADR Engineers for the project.

New Game!!, the show’s second season, began airing on Tuesday. Funimation will stream the series as part of their SimulDub lineup, though a première date has yet to be announced.

New Game! is based on Shoutarou Tokunou’s manga of the same name. The show’s first season aired during the Summer 2016 broadcast season.

18-year-old Aoba Suzukaze is joining the character design team at the company that makes her favorite video games! But the real world of office culture can be a challenge for a total noob. From her awkward first day to her first game’s debut, she’s got a lot of skills to master. Luckily, her charming determination wins over her quirky coworkers, and before she knows it, Aoba has joined the party!