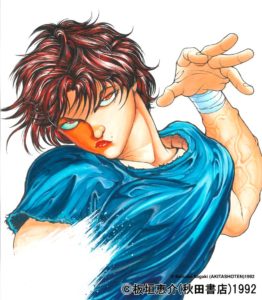 Earlier today, Netflix announced that they will stream Baki worldwide in the Fall 2018 broadcast season. The show will hit Netflix as it airs in the Summer 2018 season for Japanese users.

Earlier this month, at their “Netflix Anime Slate 2017” event, the publisher revealed that they’d stream Baki, though a specific timeframe wasn’t named.

The 26-episode show will be produced by TMS Entertainment.

Last year marked the 25th anniversary of the original Baki the Grappler (Grappler Baki) manga, which debuted in the pages of Weekly Shonen Champion in 1991. The series ran through 1999, and spanned 42 collected volumes.