It looks like it’s time to wake up as we get ready for this fall series.

Wake Up, Girls! Shin Shō will debut on TV Tokyo on October 9. The full broadcast schedule is as follows: 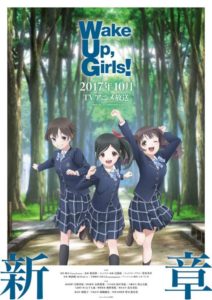 Hayashi, Morishima, and Atsugi won their roles in this year’s “Avex x 81 Produce Wake Up, Girls! Audition Dai-3-Kai Anisong Vocal Audition.” The three will make up in-show idol unit “Run Girls, Run!” Moreover, the girls will also band together in a real-life idol unit under the same name. The remaining players previously appeared in the Wake Up, Girls! anime franchise and will reprise their roles for the new title.