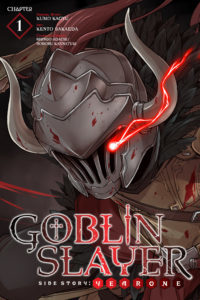 Yen Press made kind of a sneaky announcement yesterday without any warning at all. On their official website, they made the reveal that not only have they licensed the manga Goblin Slayer — Goblin Slayer Side Story: Year One but they will be simulpubbing it as it is released in Japan!

In the main story, the hero is a man known as the Goblin Slayer. He desires for nothing else but to destroy goblins. After hearing about his  reputation, a female elf approaches him with a request and thus begins their adventures together.

The first chapter of the side story is available now on Yen Press’ website.