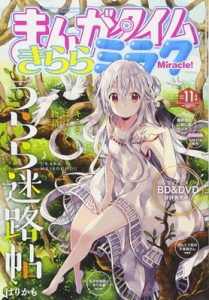 After an impressive six-year run, Manga Time Kirara Miracle! is coming to an end.

Online retailer 7net reports that the magazine’s December 2017 issue will be its final installment. The magazine’s official website hasn’t yet specified whether this final issue is the last.

The publication launched in March 2011 as a bi-monthly magazine that was released in odd-numbered months (January, March, May, July, September, November). The publication changed to a monthly format in January 2012.