The mighty Devilman is making preparations for his grand entrance overseas.

Yesterday, Netflix started streaming an English dubbed trailer for Devilman Crybaby. The new teaser, which is available on Netflix’s platform, is identical to the teaser that started streaming in Japanese earlier today.

Though the dubbed trailer isn’t available outside of Netflix proper, you can check out the original Japanese trailer below.

Devilman Crybaby will be released in all territories on January 5, 2018. 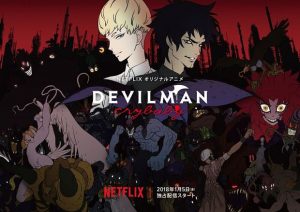 The publisher previously streamed two teaser trailers for the project, which you can check out below: