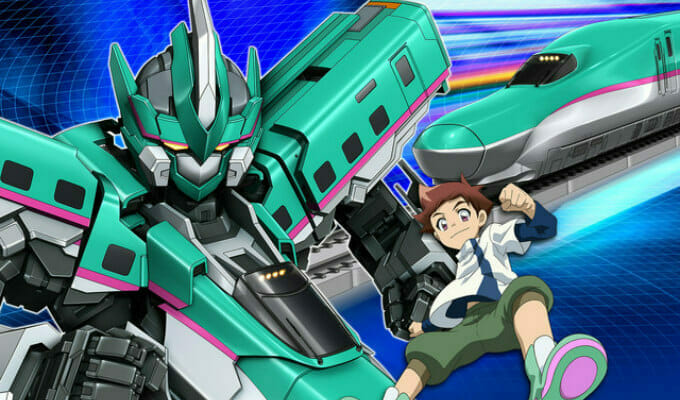 All aboard the good train Shinkalion. Next stop: adventure!

Yesterday, the official Shinkansen Henkei Robo Shinkalion the Animation anime website updated with a new teaser trailer, as well as two new cast members. We break the details down below:

The minute-long teaser offers a glimpse at the show in action.

The end of the trailer reveals that Shinkansen Henkei Robo Shinkalion the Animation will hit Japanese TV on January 6. The show will air on TBS and its affiliates at 7:00AM.

The following will join the show’s cast:

Shinkalion robots are similar to Hasbro’s Transformers, in the sense that they are Japanese bullet trains (shinkansen) that transform into robots to fight for the safety of Japan. Unlike Hasbro’s popular robots, though, the Shinkalion bots require pilots.

The anime series will revolve around Hayato Hayasugi, the son of a train museum curator who, naturally, adores trains. One day, Hayato stumbles into his dad’s secret research laboratory, where he learns that his dad may like trains a bit too much.

In the lab, Hayato discovers the E5 bullet train which, being a curious kid, he decides to enter. Upon stepping inside, an announcement sounds stating that the Bachigami (“Bee Gods”) are attacking the city of New Saitama. With the aid of Hayato’s father’s “Evolve” (“shinca”) card, the train morphs into the (ultra-merchandisable) Shinkalion E5 Hayabusa.

As the series progresses, Hayato will join with other children, who will work as conductors of the Shinkalion. The children will team up with the grown-ups of the “Shinkansen Ultra Evolution Institute”, who have come together to defeat an unknown evil.

Did I mention that the big bad is a jet-black bullet train? Because it totally is.
Source: Ota-suke