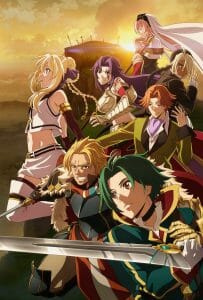 The series will début on January 5 (Well, technically January 6) on Tokyo MX, Tochigi TV, Gunma TV, and BS11. The full schedule is as follows:

The series is based on a light novel series by Record of Lodoss War creator Ryo Mizuno and illustrator Miyuu. Mamoru Hatakeyama (Sankarea: Undying Love, Hakkenden: Eight Dogs of the East) was tapped to direct the project at A-1 Pictures, with Hiroshi Yakou providing character designs. The team of Ryo Mizuno (Record of Lodoss War) and Shunsaku Yano will take charge of series composition.

Aniplex of America holds the North American rights to the series, and started streaming a subtitled trailer in October. You can check it out below:

I, Siluca Meletes, hereby make a contract with the Crest of Knight Theo, and swear my allegiance for all of eternity.” A lone mage named Siluca and a vagrant knight named Theo make an oath as master and retainer, with hopes of bringing reform to a land riddled with war and chaos. Atlatan, a land ruled by chaos. Fearing disaster brought about by chaos, the people lived protected by “Lords;” those with the power of “Crests,” used to suppress the chaos. However, the Lords decided to abandon the concept of protecting the people and turn against each other secretly in war, stealing each other’s Crests to gain dominion over one another. Among these people are Siluca, a lone mage who despises the Lords, and Theo, a vagrant knight who continues his journey of training to someday liberate his homeland from tyrannical rule. Enticed by Theo’s ideals, Siluca’s coercive tactics have the two forming a contract and together, the pair work to reform a war-torn land. Unfolding around the crystal of order, “Grancrest,” the world’s greatest record of war fantasy begins!