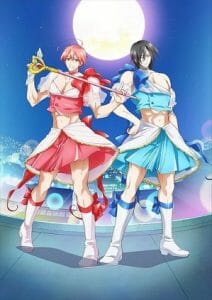 Sometimes you’ll just be sitting there minding your own business when all of a sudden, wham! A new promotional video hits you right in the side of the head leaving you a dazed and confused mess. It’s kind of tragic really, someone should really do something about that.

Regardless of that, a brand new promotional video for the Spring 2018 series Mahou Shoujo Ore has hit the internet which reveals two new main cast members.

The PV lasts almost two minutes and shows off quite a bit of the… let’s call it humor that we’ll be seeing from this series. So… are you excited to watch this one yet? Yeah, didn’t think so but that’s alright because I still have time to entice you with the reveal of two main cast members.

As you can see by the PV, the two main characters are actually girls who transform into the buff magical boys that have already been revealed to be played by Kaito Ishikawa (Saki) and Wataru Hatano (Sakuyo).

For the female side however, the characters will be played by Ayaka Ohashi (Saki) and Sachika Misawa (Sakuyo).