Check your subscriptions and prepare the popcorn! Funimation is ready to open the floodgates on the season.

Earlier today, Funimation unveiled the première schedule for their SimulDub lineup. The full lineup (so far) is as follows:

Pop Team Epic is based on Bkub Okawa’s manga of the same name. The team of Aoi Umeki and Jun Aoki (Oshiruko – The Summertime Mischief) are directing the project at Kamikaze Douga. Aoki will also handle series composition duties, while Kotaro Sudo (Ajin – Demi-Human, Seitokai Yakuindomo) fills the dual role of planner and producer.

The power of the Clow is back with a new adventure for the Cardcaptor! After sealing the last of the Clow Cards, Sakura Kinomoto is ready to face her newest challenge—junior high. But just when she settles into a normal routine, a strange dream changes everything. The cards are blank, rendered powerless, and a cloaked figure grants her a new key of magic. What lies behind this mysterious power?

Crime reaches new heights in the seedy underworld of Fukuoka—a city home to very sinister professions. Among those who kill, torture, and seek revenge as a means of living, a so-called “killer of professional killers” is becoming more than just an urban legend. Private detective Banba is on the case, but when he uncovers a dark conspiracy, it may be the one curveball he can’t hit.

The Hoshin Project: a mission to seal away the evil immortals that infest the world. After his clan is wiped out by a beautiful fox demon, young Taikobo is suddenly in charge of this project. Burdened with this destiny, Taikobo finds himself with quandary: how do you destroy demons when it was a demon that trained you? It’s a battle to find the truth and who to trust, all while saving the world.

After a veteran player refuses to log out of a popular MMORPG, the NPC’s begin to develop minds of their own—and he decides to rule them.

Haoling Li is taking the reins as chief director and writer for The Silver Guardian 2. Ken Ando (Ar Tonelico OVA) took the director’s chair on the project at Emon Animation Company, while Yoshiaki Tsubata (Phantom ~Requiem for the Phantom~, Souten no Ken) returns as character designer.

In a desolate future, children are kept away from the outside world, away from the open sky. Locked away in Mistilteinn, aka “the birdcage,” they live only to pilot giant mechs known as FranXX. Hiro was once a prodigy but after falling behind, he’s become unnecessary. After all, not piloting a FranXX is the same as not existing. But everything changes when he meets Zero Two, the girl with horns. 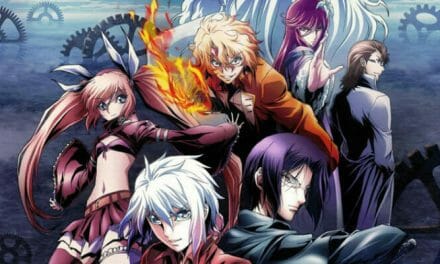