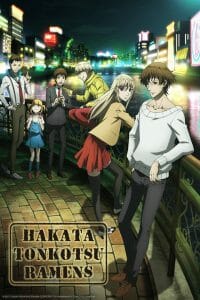 Get ready, because the underground is about to show its true colors tomorrow.

Earlier today, Crunchyroll announced the full première details regarding their Hakata Tonkotsu Ramens simulcast. The series will stream for subscribers in all regions outside of Asia starting January 12 at 8:00AM Pacific (11:00AM Eastern).

The series is based on Chiaki Kisaki and Hako Ichiiro’s light novel of the same name. Kenji Yasuda (Macross Delta, Shugo Chara!) will direct the series at Satelight, with Hidenori Inoue providing character designs. Shogo Yasukawa (Food Wars! Shokugeki no Soma, Terraformars) is in charge of series composition.