Mike Ferreira: Good evening, and welcome to the Herald Anime Club. I’m Mike Ferreira, and I’m joined by Anthony Simpson, Lydia Rivers, L.B. Bryant, and Matt Brown.
Anthony Simpson: Evening
Lydia Rivers: Hiiii everyone!
Matt Brown: /wave
L.B. Bryant: Hey everyone
Mike Ferreira: Tonight, we’re officially in the new season as we discuss The Ancient Magus’ Bride episode 15, “That’s not how you treat wounds”/”Silky Time” and Gakuen Babysitters Episode 2: “Tigers scare the shit out of kids.”
Lydia Rivers: “…because children realize that they are entertaining little snacks, unlike adults.”
Matt Brown: “Silky Time” sounds like a porno
Anthony Simpson: I really enjoyed episode 15.
L.B. Bryant: I adored this week’s episode of AMB. Particularly the second half.
L.B. Bryant: I know that I was supposed to really care about Chise and her fight for survival but once we got Silky’s story I was all about that. 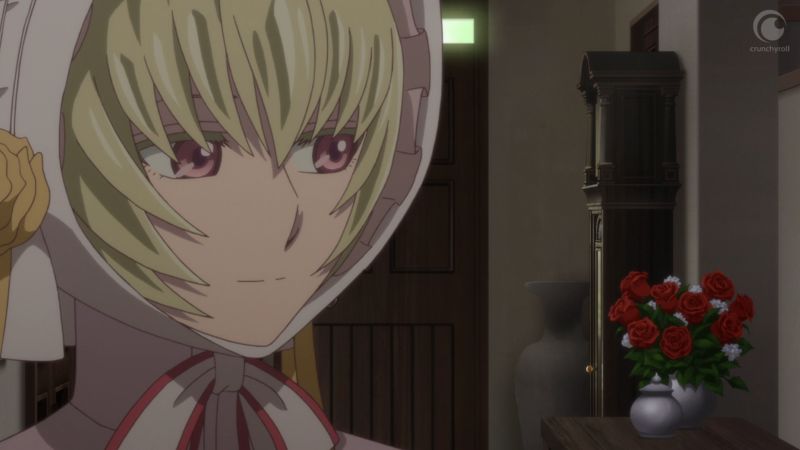 Anthony Simpson: We learned somethings about Silky’s background. So we learned that she is a Banshee.
Anthony Simpson: That and a hell of an interior designer.
Mike Ferreira: Silky’s B-Plot was fantastic.
Lydia Rivers: The B plots the the most interesting plots in this show
L.B. Bryant: My wife and I were both sitting there going “how do we learn how to re-decorate like that?”
Mike Ferreira: She knows how to use a hammer for more than breaking legs.
Matt Brown: Seems pretty easy…put your hand against the wall and concentrate and stuff happens.
Anthony Simpson: Note to self: try and find a Banshee.
Lydia Rivers: I think I’ve figured it out. The weird pacing and stuff. There are different ways to approach a narrative. I prefer people who create worlds to tell a story, and this is the kind that creates stories to tell about a world. 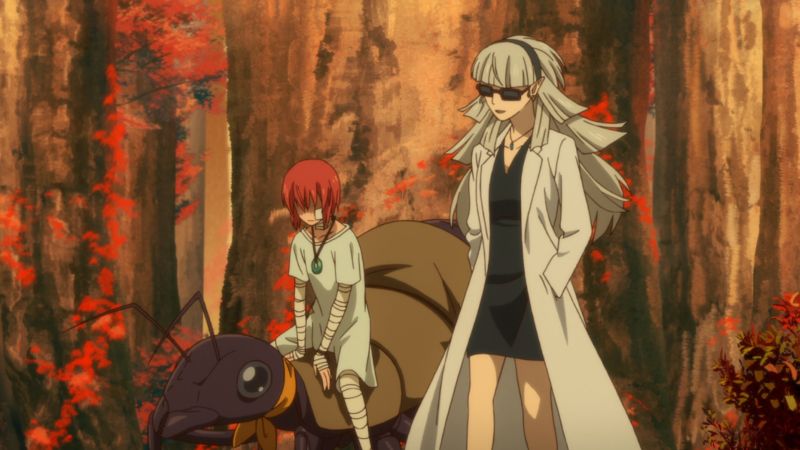 Matt Brown: It even takes us to the set of Honey I Shrunk The Kids.
Lydia Rivers: There are so many little odd bits to illustrate the world that detract from the main storylines, and the B stories are for that purpose too but they’re contained, so I enjoy them more
Lydia Rivers: And it’s a lovely world, but it’s not as weird and interesting as like…Mushi-shi right
Lydia Rivers: So that’s why it feels so slow to me.
Mike Ferreira: Honestly, that’s probably the best way to describe this show’s form of world building.
Matt Brown: Yeah, it’s more about character experience than the natural world
Matt Brown: Ginko’s more of a guide than a protagonist, whereas we’re living Chise’s experience
Lydia Rivers: I am glad that the character development is so slow though. That much feels organic.
Mike Ferreira: Indeed… my big worry is that they’re going to try to rush that once we get into the back-half of the season..
Lydia Rivers: Putting in two main characters that are so deeply flawed was really brave, and I appreciate it. Now that I have realized that I’m supposed to change my focus from the actual story, to appreciating the world-building, I’m not as frustrated. 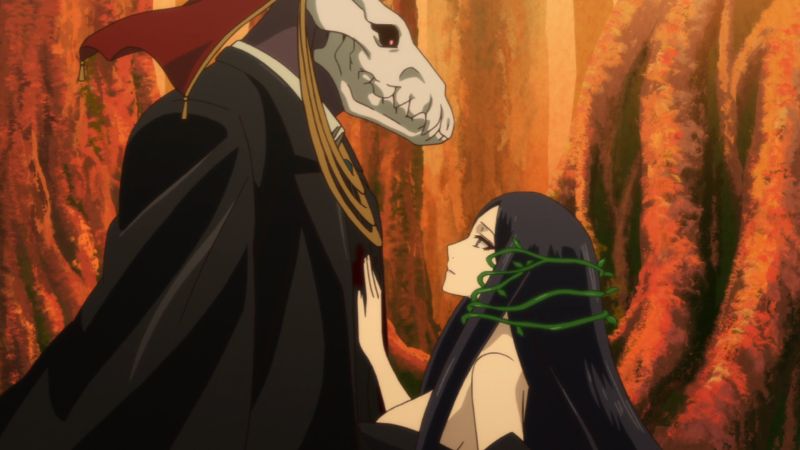 L.B. Bryant: This series has been nothing if not consistent so I think we can count on a steady pace throughout the second cour.
Lydia Rivers: Agreed with LB
Mike Ferreira: I hope so.
L.B. Bryant: As a quick aside, how cute was smiling chibi Silky while she was waiting for Elias and Chise to come home? :)
Lydia Rivers: Oh my god!
Mike Ferreira: Oh my god that was so precious
Anthony Simpson: That was amazing.
Mike Ferreira: That and just her entire reaction when they returned home. Big hugs, big smiles… she really does adore her adopted family.
Lydia Rivers: But yes! Please give me more short stories like that, and the super sad one we had recently. Mooore!
Lydia Rivers: One featuring axolotyl puppy would be great
Mike Ferreira: Puppy episode when? 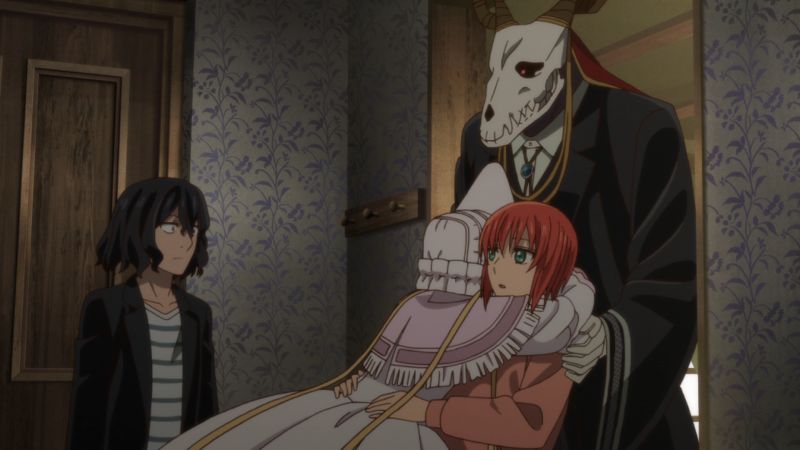 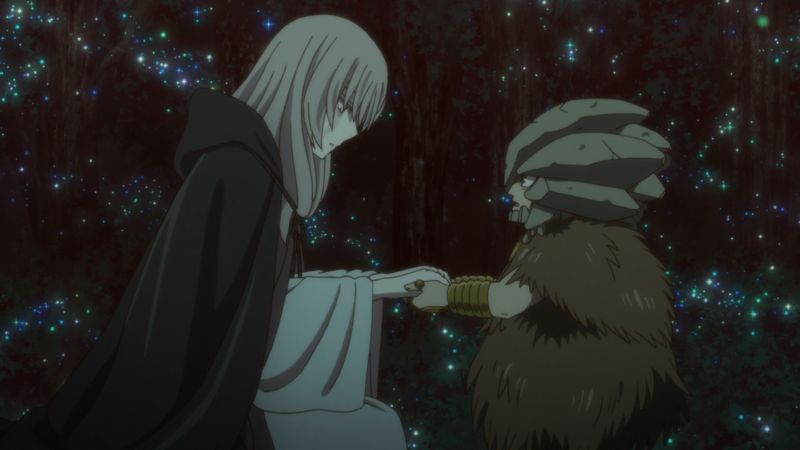 Lydia Rivers: I can’t imagine people calling her aniki
Matt Brown: I guess if Komugi got her own show, then Silky can too
L.B. Bryant: That’s the power of positive thinking right there.
Mike Ferreira: If Fate/stay night can get a freaking cooking show, weirder things can happen
Lydia Rivers: Please do not stir the dark side of the force
Lydia Rivers: I can feel it flowing through me
Mike Ferreira: I’ll be good.
Mike Ferreira: On another note: Fairy medicine is weird. Like… “That’s not how this works. That’s not how any of this works” weird.
Matt Brown: Surprised there aren’t memes of Silky saying “Kyon-kun denwa”
L.B. Bryant: Yeah, I have to admit that strangling your patient underwater in an effort to make them fight for their life to heal their wounds seems counter intuitive. :)
Lydia Rivers: Fairy medicine: the duct tape of plot devices
Mike Ferreira: Indeed.
Anthony Simpson: Note to self: Don’t go to Shannon for medical needs. 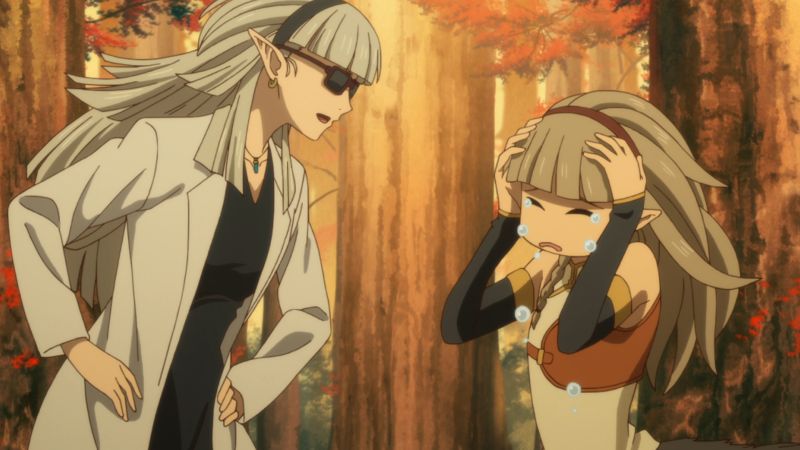 Matt Brown: Haha, yes. I expect there to be drown yoga classes cropping up soon. Endorsed by faeries
Mike Ferreira: “She’s a little weird” translates to “She’s gonna try to kill her, yanno”
Lydia Rivers: “Shh. It’ll work, we promise. Until you get better, we’ll be taking back the forests, alright? *wink*”
Matt Brown: That’s kind of a theme of this show isn’t it Mike? Pretty much every new character, you’re asking if Chise is in mortal danger.
Matt Brown: It’s like “oh hey there’s this nice old man paying us a visit WHAT WHY AM I A FOX NOW?”
Mike Ferreira: Pretty much. The only one this season who hasn’t actively tried to screw with Chise was the Leanan Sidhe (still deserves all the hugs)
Lydia Rivers: I liked that one though. He gave her a taste of what the exhilaration of unfettered freedom feels like.
Matt Brown: It was Wolf Children, the episode
Mike Ferreira: Indeed.
Mike Ferreira: Ashen Eye still intrigues me as a character.
Matt Brown: And the one where there’s fluffy flying sheep except there’s EVIL LURKING ABOUT~
Matt Brown: I know you guys covered all this already..just saying :3 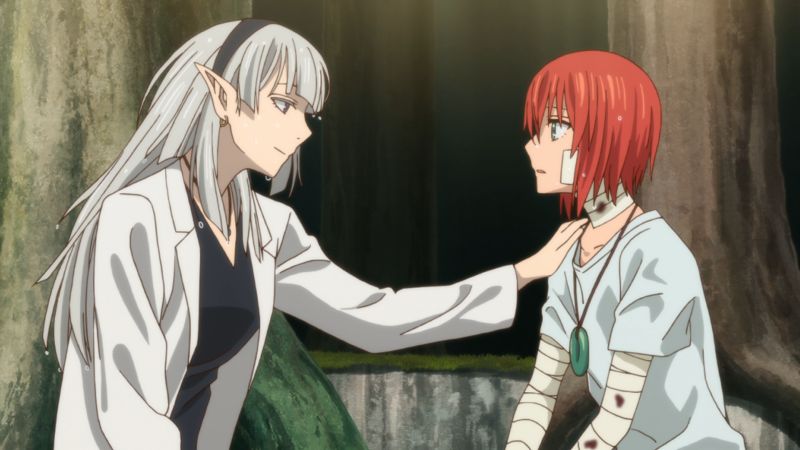 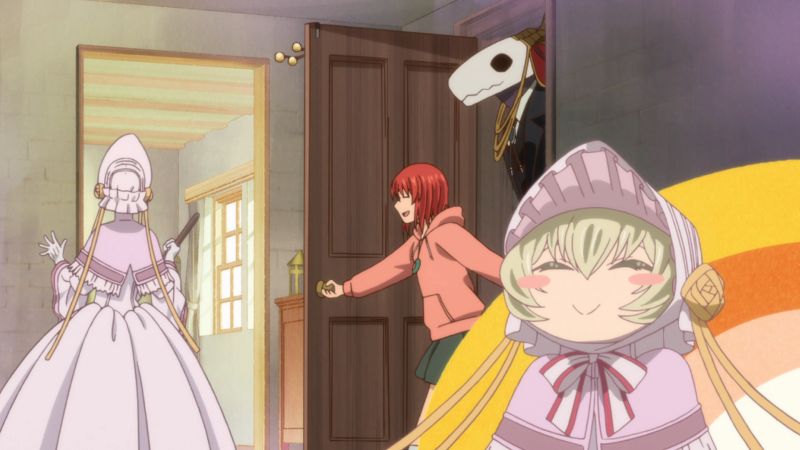 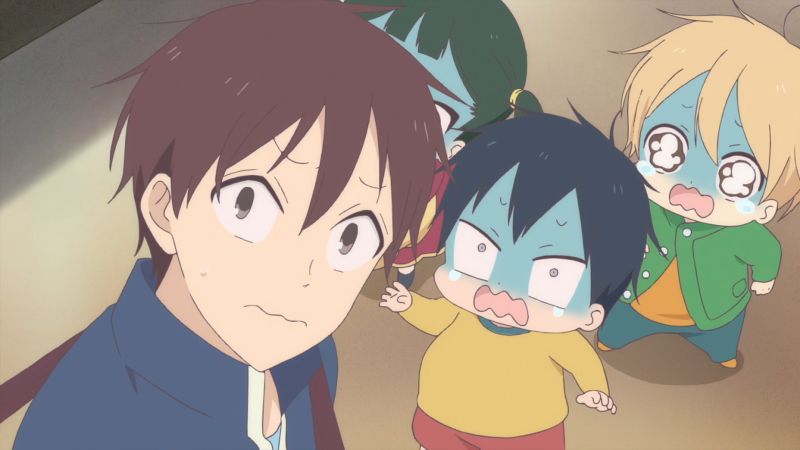 Lydia Rivers: I had the exact same reaction to both Clannads
L.B. Bryant: I think comparing the manipulation levels of this series to either of the Clannad series is a little bit of overkill but I see your point.
Lydia Rivers: It’s not manipulating you to cry, but it’s manipulating every bit as calculatedly, even from choosing the protagonist to be a middle school boy
Lydia Rivers: whose cuteness factor is upped by the fact that it’s not a typical sight within gender roles at all
Lydia Rivers: to see a motherly young boy
Mike Ferreira: Indeed. Not to mention that it’s not overly subtle, there
Lydia Rivers: And don’t even get me started on including all of the hearthrob personality tropes that go best within it. Quiet, samurai type. AWWW!!! When he finally gets embarrassed. Tsundere girl who just wants to have friends too. Lazy 20s something adult who is actually a pretty good guy
Lydia Rivers: like
Lydia Rivers: I could go on forever
Mike Ferreira: It’s basically saying “look at these babies, aren’t they cute? Don’t you want babies too? You want babies, you totally do.” 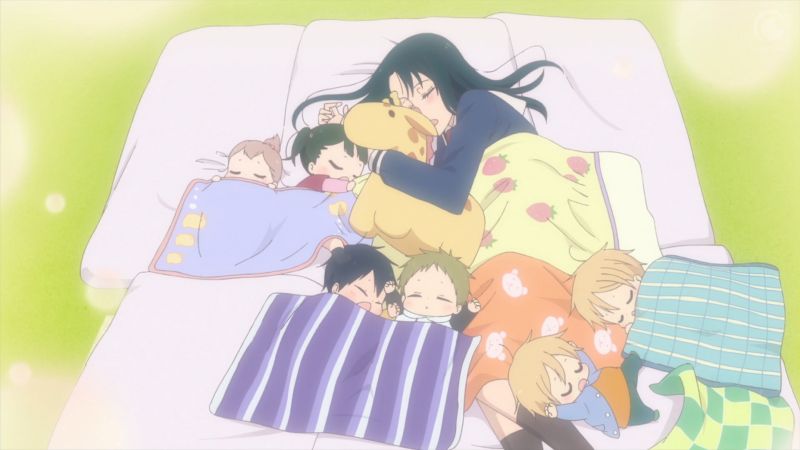 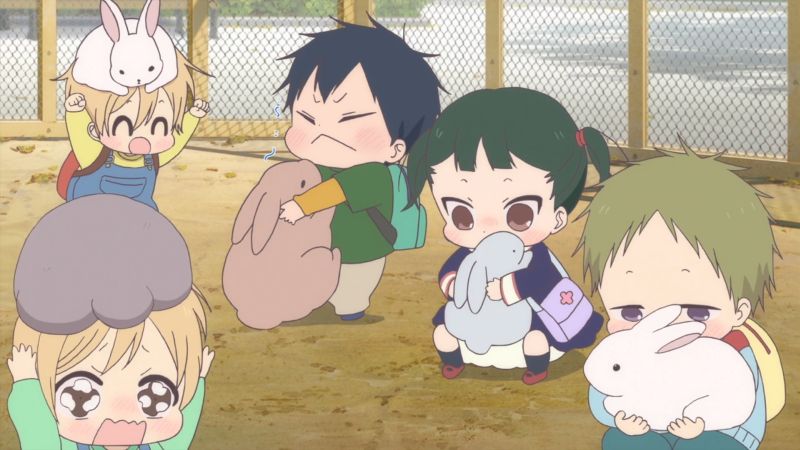 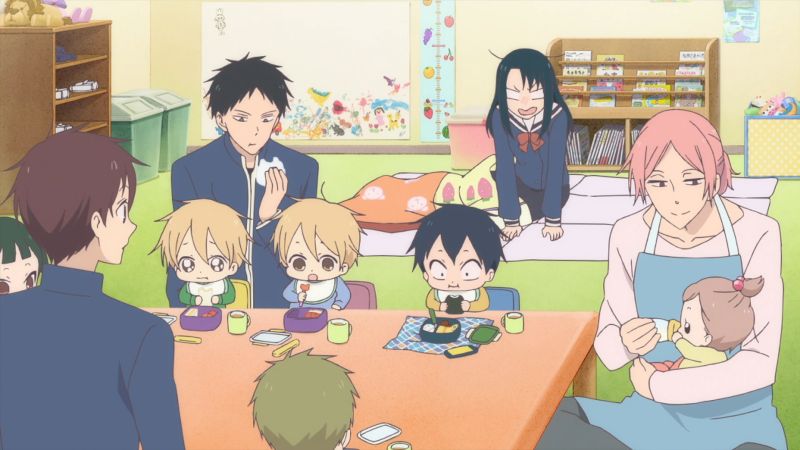 Anthony Simpson: I was a lazy student in HS and tech school.
Lydia Rivers: I did like seeing her fall asleep in a hamster pile with the kids. I’ve done that too with siblings. It’s nice, when you’re actually getting along
Lydia Rivers: My brother and I basically related like the samurai guy and his little brother though. RAAAAGH! Until there was a major problem.
Anthony Simpson: Can’t say I have done that. I didn’t spend a lot of time with my sister when we were growing up due to her being 10 years older than me.
L.B. Bryant: My sister is six years older than me and I remember clinging to her like a shadow throughout a lot of my younger years.
Lydia Rivers: Yeah, I was 13yrs when my half siblings were coming into the world. I hear you there, Anthony.
Lydia Rivers: That’s adorable, LB
Mike Ferreira: My brother’s two years older than I am… I feel like an alien here, so I’ll bow out lol
L.B. Bryant: lol
Lydia Rivers: Well, now that we’re adults, we all can choose our family.
Lydia Rivers: Unlike those little rugrats!
Mike Ferreira: Indeed. 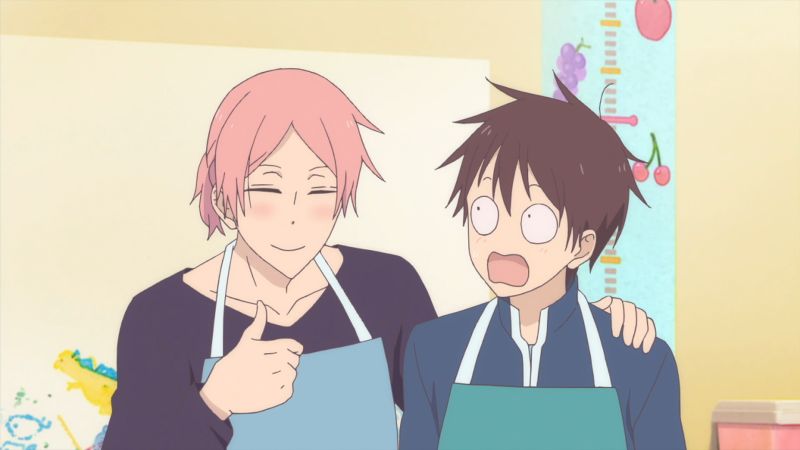 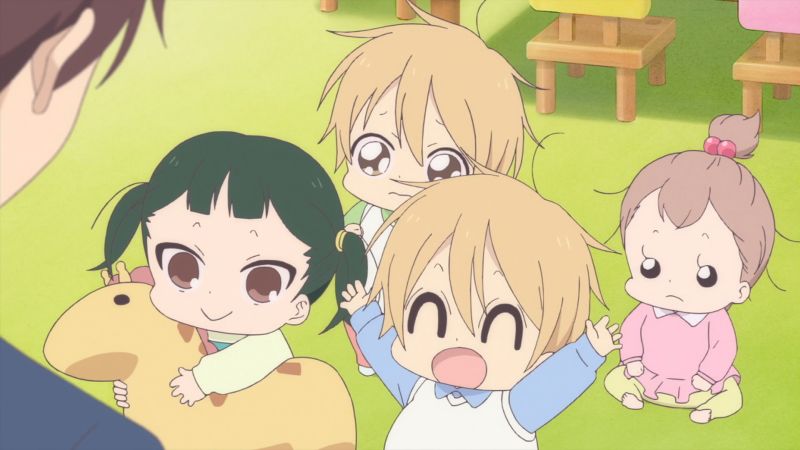