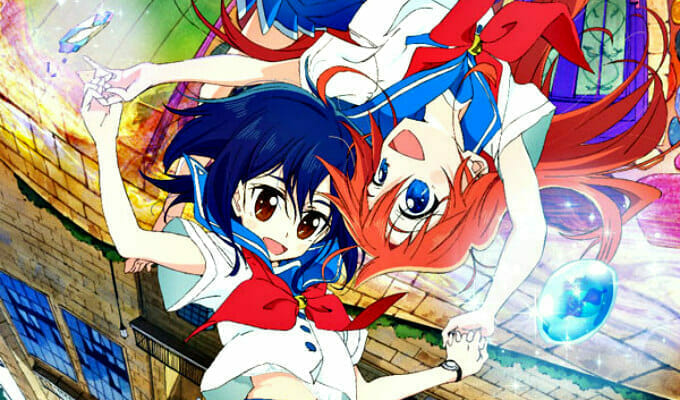 Now, everyone can escape to a new dimension…

Earlier today HIDIVE announced that they added the English dub for Flip Flappers to their digital platform. The first episode was added today, with new episodes slated to be added weekly.

John Swasey is directing the adaptation, which features scripts by Marta Bechtol.

Flip Flappers hits home video on February 27. The series will be released in standard and Premium Edition Blu-Ray sets, which retail for $69.98 and $149.98, respectively. The Premium Edition will include a 280-page artbook, a set of art cards, and a bookmark.

Flip Flappers originally aired in the Fall 2016 broadcast season, and streamed on The Anime Network in North America.

As a middle school student, Cocona has been trying to decide what to do with her life. Magical Girl, however, wasn’t a career path that she’d ever considered. When suddenly a strange girl named Papika thrusts her into a secret organization called Flip Flap, Cocona’s outlook does a radical flip-flop. Her views start to change when she is dragged into an alternate dimension called Pure Illusion where she’s charged with gathering crystal shards and fighting strange creatures. Now, between running missions and facing off against a rival organization, Cocona doesn’t have much time to consider alternate career choices. What are these shards, and why is gathering them so important? There’s a mystery to be solved and multiple worlds to be saved in FLIP FLAPPERS!