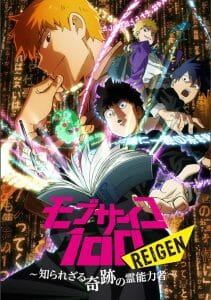 It’s a healthy dose of Mob Psycho 100 before the show’s big return!

Earlier today, Crunchyroll started streaming the Mob Psycho 100 Reigen OVA on their digital platform. The episode went live at 10:00AM Pacific (1:00AM Eastern).

The core staff from the first season of Mob Psycho 100 worked on the OVA. Yuzuru Tachikawa (Death Parade) returned to the director’s chair at Bones, while Yoshimichi Kameda (Paroru no Miraijima) provided character designs. Hiroshi Seko (Ajin – Demi-Human, Seraph of the End) was in charge of series composition.

The hour-long episode is a compilation, which recaps the events of the show’s first season. Roughly 15 minutes of new footage was produced for the title.