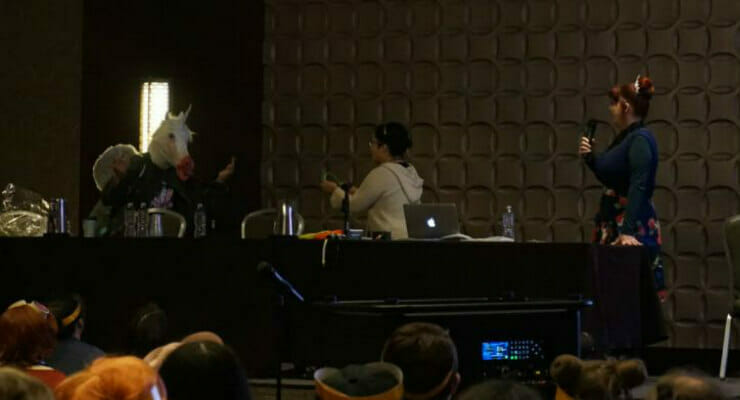 Through my career, I’ve covered a lot of anime industry events. And, from the breezy license-fests of the bubble to exercises in the most juvenile, I thought I had seen it all.

What I didn’t realize, though, was that we needed more glitter.

Viz Media’s Official Sailor Moon Panel was a packed-house event, as nary a seat was vacant in the Sheraton’s Constitution panel room. Charlene took to the stage with applause from the crowd, before she led the room in calls for the shiny stuff. The walls rumbled with the voices of the roughly hundred fans, packed into the room.

Much of the panel followed the usual industry format, and, well… I won’t be talking about that today. It’s not important. The real fun came from the more offbeat moments.

Basically, after every major reveal, every the onstage action would divert to either a trivia session, or a question for the actors. The questions themselves were softballs, “What’s your favorite attack,” “Is there a line that you ever got tired of,” and the like. Sheh and Miller, though, had fun, and maintained a quirky sense of humor as they answered.

The highlight of the event, though, came near the midpoint. Shortly after the big Sailor Moon SuperS dub cast reveal, Ingram presented Sheh and Miller with a package. Inside was a pair of cosplay wings and a realistic unicorn mask. The two took turns playing a game of ring toss. Basically, one would wear the wings and mask while the other would toss rings, hoping to hook the horn. With each throw, they channeled their inner Sailor Guardians, shouting out characters’ signature attacks.

The event closed with a preview of the upcoming Sailor Moon SuperS boxed set, as well as a première screening of a promotional episode that hadn’t been previously released in the west.

Due to scheduling, conflicts, or some other issue, I had never actually been able to visit previous Sailor Moon panels. That said, though, I might have to fix that going forward. Though the format remained consistent with other industry row events, the panel’s laid-back atmosphere and quirky sense of humor were a true delight. The premieres and fan treats were simply icing on the cake.

Apparently, when reinventing the industry panel, all you really need is more glitter!

AniSpring: Anticipation of The Worst