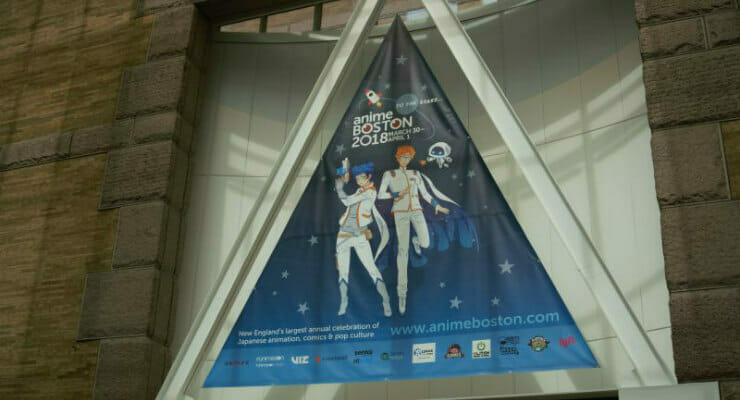 We know that it’s a bit weird to be doing this last, but… such is the reporting life.

As the clock ticked past 8:00AM, a commuter rail train made its way into Back Bay Station. A slight chill could be felt in the air, as Seth and I stepped out, and began our annual trek toward the Sheraton Hotel, as we have several times in the past. We were greeted by a line that stretched to the very back of the establishment as we walked in. A few required stops later, though, and we had a room, we had our badges, and we were ready to get to work.

This year’s theme was “To The Stars…” and, as expected, the event was decked out with spacey signs and exhibits, which elicited memories of shows like Macross and Voltron.

The event floor, itself, was also abuzz with activity, as congoers began to snake their way through security, and onto the show floor. Walking through the Hynes, it was hard not to notice the line that was forming outside of the Dealer’s Room, and the steady flow of traffic that was filtering through the Artist’s Alley.

I guess the old adage still holds: some folks just like to get their shop on.

Just before 10:00, the doors opened to the Main Events auditorium, and a torrent of fans started to filter in. One by one, the rows filled with eager fans of all ages, who were ready for this time-honored tradition.

As the last seats filled, the convention safety message kicked onto the screen. This year’s PSA took on an irreverent, Mystery Science Theatre 3000 vibe, complete with the shadow figures snarking at the video. It was cute, and it got the points across without overstaying its welcome.

With the formalities finished, it was time for the annual “Cosplot” sketch to kick off. The Cosplot, for those new to Anime Boston, is the convention’s own home-grown series of shorts, which serve as a general bookend for the event. Actors play the parts of mascots A-chan and B-kun in a series of short segments, which are set within the year’s theme, and played before specific major events.

Aniwho, with the comedy routine finished, and the mascots making their way offstage, the Opening Ceremonies fell into its normal rhythm. Chairman Victor Lee and vice chair Lauren Gallo took the stage to discuss the event, and the various topics of interest, before ceding the stage for guest introductions.

We won’t bore you too much with the details, though we do have plenty of photos from the event, which you can check out below!