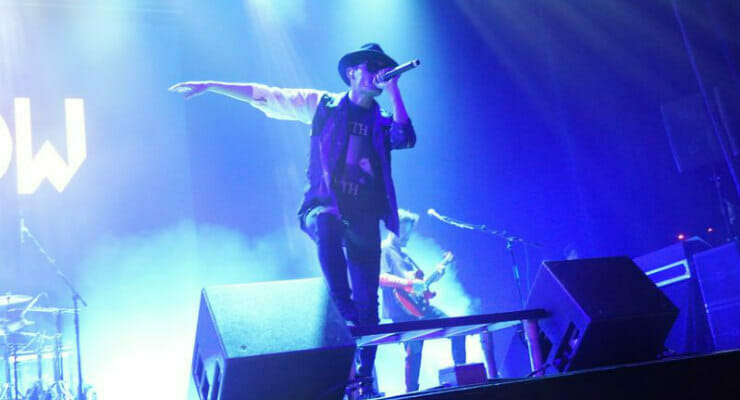 This year’s headlining musical act came courtesy of FLOW, whose musical achievements in the anime space are numerous. Since they made their début in 1998, FLOW’s performed theme songs for sixteen fan-favorite anime titles. Their distinct sound has worked its way into the hearts and playlists of countless anime fans, whether they were rocking out to Naruto theme song Re:member, or The Seven Deadly Sins intro 7-seven-.

For Anime Boston, the group brought their A-game, as they belted out their biggest hits from the anime world and beyond. The group dominated the stage, accenting their skilled performance with an almost manic energy as they worked the room. Possibly the highlight of the night, though, came not from their own catalog, but from that of Neil Diamond. Since the group was in Boston, they decided to celebrate the evening by performing their own version of unofficial Red Sox anthem Sweet Caroline. It was an unforgettable moment, that I can only liken to a similar event in 2011, when when Stereopony belted out American Idiot for a capacity crowd at the Hynes.

It was a memorable experience that won’t soon be forgotten, and a show that will be talked about for some time by Anime Boston vets.

We had permission to take photographs of the first three songs from FLOW’s concert, which you can check out below. All image credits to Samantha Ferreira. Captions courtesy of Seth Burn.

Kohshi up close and personal.

The story of every band. The vocalist (Keigo) in the foreground. The bassist (Got’s) in the background.

Keigo sings, Got’s plays, Iwasaki drums (and tries not to ascend to Heaven via the beckoning light).

All hail our Anisong overlords.

All hail our Anisong overlords.