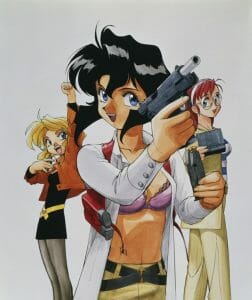 It’s official: Minnie May and Rally Vincent are back in action once again.

The campaign reached all eight planned stretch goals through its run:

AnimEigo is currently taking input for one final “Backer’s Choice” stretch goal, which will be submitted for a vote to backers on which they’d like to see as post-Kickstarter goals.

The campaign reached its initial funding goal in just 4 hours and 21 minutes.

Two versions of the Blu-Ray will be produced:

The Blu-Ray will include uncompressed Japanese (stereo) audio, as well as English stereo and 5.1 (ac3) tracks. Bonus features will include:

AnimEigo announced that they acquired the rights to the Gunsmith Cats OVA on December 3.

Gunsmith Cats is based on Kenichi Sonoda’s manga of the same name. The three-episode OVA was directed by Takeshi Mori (Stratos 4, Vandread) at Oriental Light and Magic, with Kenichi Sonoda (Bubblegum Crisis, Gall Force) and Norihiro Matsubara (Pokémon: Black and White, Berserk) teaming up to provide character designs. Atsuji Kaneko wrote the screenplay.