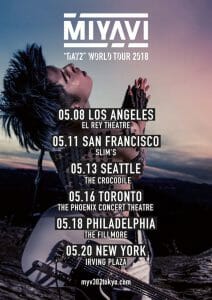 So, ah… apologies for not getting this out sooner.

On May 7, Universal Music Japan announced the full list of North American dates for MIYAVI’s “Day 2 World Tour 2018” event. The guitarist will perform in six cities throughout the month of May, with the full schedule as follows:

Tickets are currently on sale via Ticketmaster, Viagogo, AXS and other concert retailers.

MIYAVI is the stage name for “Samurai Guitarist” Ishihara Takamasa, who’s been active in the entertainment industry since 1997. The Osaka native made his début with visual kei rock group Dué le Quartz, where he played guitar, composed, and arranged. The group split up in 2002, which began the artist’s solo career. His first solo concert was held at the Shibuya Public Hall in 2003.

In 2013, MIYAVI won the MTV Video Music Awards Japan award for Best Collaboration on the song Day 1, which he performed with Yuksek. In 2014, the artist made his film début in Unbroken, and has gone on to appear in other American pictures like Kong: Skull Island.