You’ll be angling for more of this title before long! (That was terrible…) 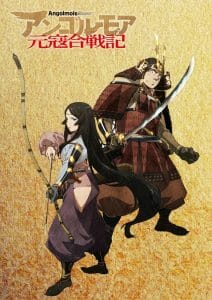 Straightener will perform the opening theme song for the series, while SHE’S will provide the closing theme.

Angolmois made its debut in the pages of Kadokawa’s Samurai Ace magazine in 2013, before moving to the Comic Walker app a year later. The title currently spans nine compiled volumes, with the most recent hitting stores on March 26.