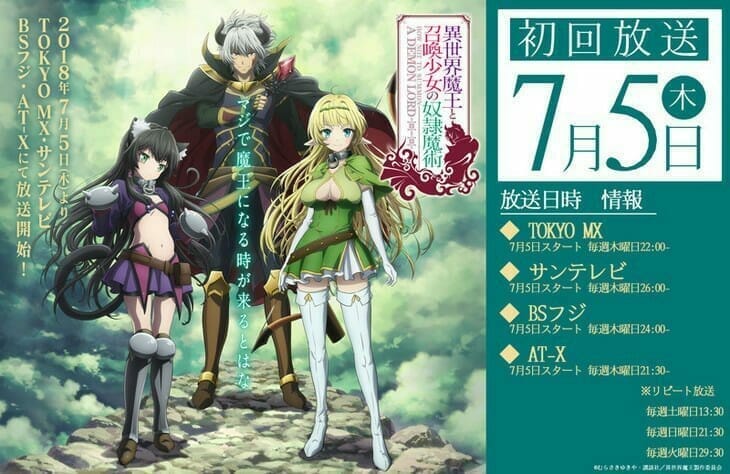 Oh! So that’s what I’ve been doing wrong this whole time!

In an update posted to the official website for How NOT to Summon a Demon Lord, it was revealed that the series will be premiering on July 5th.

Furthermore, it was revealed that Atsumi Tanezaki, Sayaka Senbongi, and Yuka Morishima will be joining the cast as Klem, Celestine Baudelaire, and Mei respectively.

They join the already announced cast of:

The series is being produced by Ajia-do (Genshiken, Izetta: The Last Witch, the Fairy Tail: Phoenix Priestess movie) and is directed by Yuta Murano (Brave Beats). Working alongside him as the writer is Kazuyuki Fudeyasu (series composition – Ben-To, Black Clover, Girls’ Last Tour, Miss Monochrome, and many others).

J-Novel Club is releasing the series in English via their website and describe the series as:

In the MMORPG Cross Reverie, Takuma Sakamoto is so powerful that he is lauded as the “Demon Lord” by other players. One day, he is summoned to another world – but with the same appearance he had in the game! There, he meets two girls who both proclaim themselves to be his Summoner. They had performed an Enslavement Ritual to turn him into their Summon… but that’s when Takuma’s passive ability “Magic Reflection” activated! Instead, it was the girls who had become enslaved! Though Takuma may have been the strongest Sorcerer there was, he had no idea how to talk with other people. That’s when he makes his choice: to act based on his persona from the game!
“Amazing? But of course… I am Diablo, the being known and feared as the Demon Lord!”