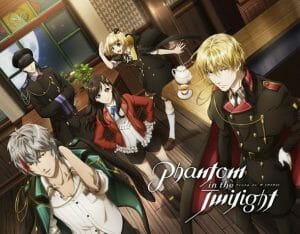 Wherever a phantom may go, the darkness will always welcome them.

Earlier today, the official Phantom in the Twilight anime website updated with seven new cast members. The series will add the following:

Phantom in the Twilight hits Japanese TV on July 8.

Happy Elements describes the title as:

The stage is modern, London.
A world in which people who are not “shadows” are born from human fears and fears ….

A young girl who came for college studies can get involved in a bizarre incident as soon as she arrives at the university.

A strange coffee shop that was open quietly at midnight when she did not know her, asking for help.

Its name is “Cafe Forbidden”