Ongaku Shōjo will air on Japanese TV on July 6. The full schedule is as follows: 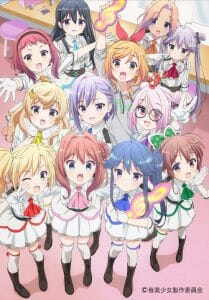