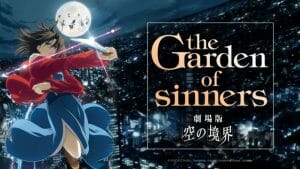 Finally, we won’t need to hunt down one of those ultra-rare Blu-Ray boxes!

Earlier today, Aniplex of America announced that they will rerelease The Garden of Sinners on home video. The series will ship on Blu-Ray on September 11, 2018.

Aniplex’s release will include the “pre-show” shorts, as well as the Final Chapter: The Garden of Sinners movie.
The Garden of Sinners films are based on Kinoko Nasu’s (Fate/stay night) Kara no Kyōkai novel. The films, which were released between 2007 and 2013, were produced by studio ufotable.

Aniplex first released the first seven The Garden of Sinners films in North America in 2011. At the time, the movies were released in a single set. A limited-edition DVD set hit retailers a year later. A standard-edition Blu-Ray set for the eight core films shipped to stores on November 10, 2015.