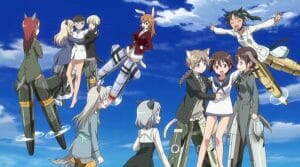 Oooh, Samantha is going to be so annoyed that she’s busy traveling today with all the news that I have to share with you. Oh well, when the cat’s away… something, something mouse.

First off, in 2019 there will be a new anime titled Strike Witches 501 Butai Hasshinshimasu!. Based off the manga of the same name (which ran in 4-Koma Nano Ace magazine from 2013 to 2016), this is one of the sillier Strike Witches spinoffs as it deals with the girls doing daily chores when they aren’t busy fighting off Neuroi.

Second up, we have a new anime that is confirmed to hit TV airwaves in 2020 titled Strike Witches: Road to Berlin from studio David Production.

No details are available as of yet on what the story for this one will involve (besides a trip to Berlin) but it will feature Kazuhiro Takamura returning to direct while Striker Unit will handle the series composition while Tatsuhiko Urata will return as chief writer.

Finally, we come to the inevitable conclusion which would be Idol Witches. Yes, in this series the main characters don’t fight but instead soothe those who have been driven out of their homes by the Neuroi with the power of song and dance.

The series will feature Shouji Saeki sitting in the director’s chair and is handling the series composition. The new series will air in 2021.