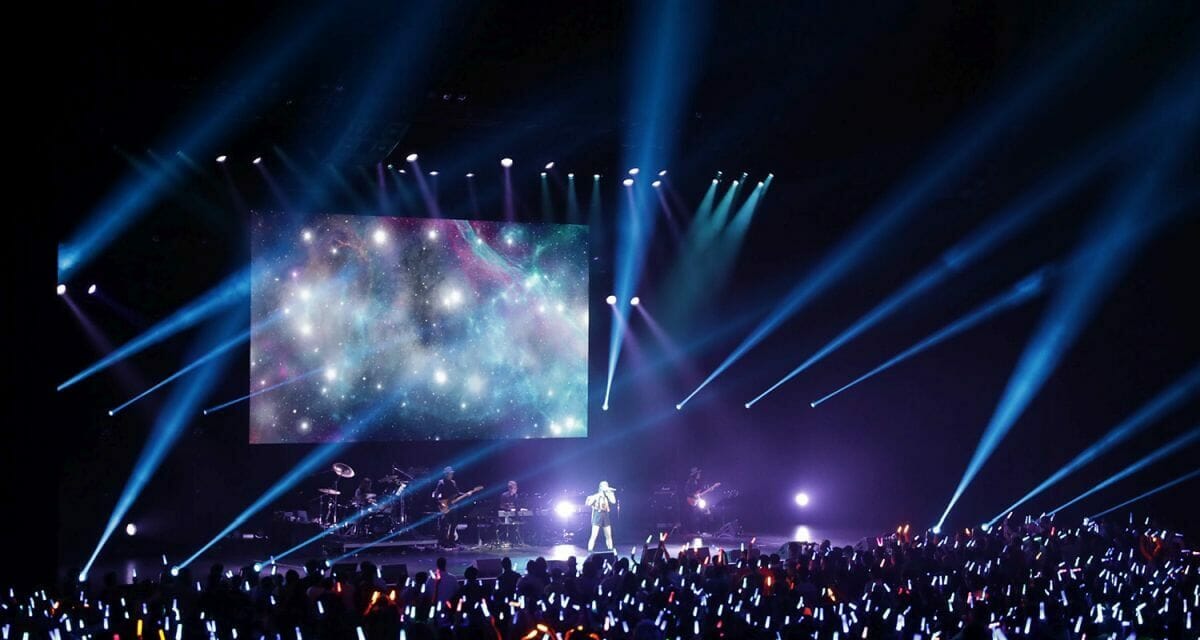 I’ve been to a fair amount of concerts, including classical, rock, and anisong. Few have had the electricity in the crowd that could be felt at Japan Super Live. With an all-star lineup of the anisong industry, this show brought in fans from all around the country, as well as Asia. The Microsoft Theater at LA Live was packed with a pumped up, sold-out crowd. May’n warmed up the room, as she ran out shouting “Are you ready to make some noise?! Come on, Los Angeles!” The crowd was indeed ready to rock

She opened up the show with Chase the World (Accel World). The song was a high- intensity track, as well as a good choice for a crowd that was full of energy. She followed with One In A Billion (Restaurant to Another World). Here, we got so see May’n both sing and dance (along with her backup dancers).

After May’n finished One In A Billion, she addressed the crowd in English. She said that she was very happy to back in Los Angeles at Anime Expo. “Wow! So many, many people!” (Microsoft Theater really was packed). There was a charming moment when she waved to the fans on the upper mezzanine, calling out “I can see you!”

Heading into her third song, May’n exhorted the crowd. “Tonight, let’s make a big memory! Let me hear your voice,” she cried out. The opening notes of Northern Cross (Macross Frontier) rang out, and we were off. The blue glow sticks, with pockets of red, complemented the celestial background.

May’n followed with You (The Ancient Magus’ Bride), another high energy song. She kept the tempo up with her next song, Belief (Taboo Tattoo).

May’n returned to the Macross universe for her next and final track, Diamond Crevasse (Macross Frontier). The crowd serenaded her with shouts of “Mayn, May’n, May’n” and cheers of “We love you!”

May’n addressed the crowd. “It’s been eight years since my first Anime Expo… I’m back!” she announced. “This song is my precious song, because this song changed my life. I was able to meet everyone around the world. We may have different languages and countries, but music makes us one.”

Seeing the love from both sides was a special moment and a great close to the first set. For those of you interested in hearing a great May’n live performance, Re:May’n Act has you covered.

After a brief break, Sanketsu-girl Sayuri took the stage. I overheard a girl in my row say “Nice bangs.”

Sayuri dropped out of high school to pursue a career in music. She adopted the name “Sanketsu Shōjo Sayuri,” or “2.5 dimension Sayuri,” to emphasize her singer-songwriter duality. Where May’n is a world-class talent (at 13, May’n was part of a group of four that bested 34,907 other hopefuls. She later sold out Nippon Budokan in a single day), Sayuri worked her way up from the streets. There are many paths to stardom. Japan Super Live did not discriminate.

Sayuri opened up with Heikousen (Scum’s Wish). She followed with Sore wa Chiisana Hikari no youna (Erased). Two major hits (I’ve heard the latter playing in a shopping mall in NYC). She followed with our first of many visits to the Fate universe, Tsuki to Hanataba (Fate/Extra: Last Encore). Between her acoustic guitar and her brief chats with the audience about the songs, I felt like I was listening to a Japanese version of Bruce Springsteen. It was a cool feeling.

Her next track, Furaregai Girl has an interesting backstory. From Yojiro Noda:

“I had already composed the song and created the lyrics, but I knew that I couldn’t sing it. For a while, I searched for the true owner of the song. Then, by chance, I was in the recording studio next to Sayuri. I listened to her CD, and in that moment, something that was only a vague silhouette of a song became crystal clear. It was a song that she was meant to sing.”

The irony of “The Girl Who Should Be Rejected” being sung by the girl who was found serendipitously was not lost on me.

Sayuri closed with Mikazuki (Crescent Moon, from the anime Rampo Kitan: Game of Laplace). As she told the crowd, this was the song that launched her career. (Editor’s note: It’s also the title of her first album Mikazuki no Kokai, or “Crescent Moon Voyage,” which I highly recommend.)

After her set was over, Sayuri addressed the crowd: “You guys understand Japanese? That’s so awesome! This was my first time leaving Asia to sing in America. I would like to come again, so please enjoy life and have fun. Let’s meet again. Thank you so much for today.”

After wishing the crowd happiness and good health, Sayuri bowed and left the stage. We had a brief break while they set things up for Aimer. At this point, it is well known that Aimer lost her voice at the age of fifteen. She persevered and rebuilt her voice into the powerful distinct sound that has helped define the Fate universe. Through all of this Aimer has kept the focus on her music, preferring to stay in the background. She only revealed her face close to five years into her musical career. For her performance at Anime Expo, Aimer simply sat on her stool (backlit with a light fog effect), and belted out some of the most memorable anisong tracks of the past few years.

Aimer opened with StarRingChild (Mobile Suit Gundam Unicorn). Afterwards, she returned to the Fate universe with Brave Shine (Fate/ Stay Night: Unlimited Blade Works). Through the song, clips from the Fate franchise played on the screen in the background.

Aimer switched gears with the gentle ballad Ref:rain (After the Rain). Here, the crowd switched their lightsticks to white and recreated the ephemeral fog that appears after a passing shower.

Aimer shifted back to the Fate universe to stay with broKen NIGHT (Fate/hollow ataraxia). Again, clips were played in the background as the crowd sang along and cheered at key moments.

“I’m very honored to sing in front of all you amazing people. Moments like this make me grateful, and I hope I can live with you through music. I’ll definitely come back again. Arigatou gozaimashita! I would like to dedicate my last song to you…” -Aimer

She closed with LAST STARDUST (Fate/stay night: Unlimited Blade Works). It’s somewhat difficult to describe how powerful her voice was here. Perhaps, because it was her last song, she was able to go all out. She absolutely killed it. It was an amazing performance, and one that blew away the cheering crowd. By the way, it wasn’t your imagination, the camera was blurry whenever Aimer was the center of the shot.

For those of you interested in checking out Aimer’s catalog, her collection albums blanc and noir are a great place to look. They are also available together with Blu-ray or DVD editions. (Editor’s note: Kitties!)

The cheers as Yuki Kajiura’s name was flashed on the screens signaled that the maestro had arrived. The living legend was our final performer of the night. Yuki Kajiura is a composer and lyricist with a legion of credits to her name. She took the stage, accompanied by a five-piece band and three vocalists. Kajiura, herself, played keyboard.

Fittingly, she started her set with the beginning of the end (Fate/Zero). Green lightsticks under blue lights set the stage, as flutist Rie Akagi captivated the audience. Next up was Lancer and Assassin (Fate/Stay Night [Heaven’s Feel] I. Presage Flower). Is there anything more ominous and epic than an operatic trio performance with a classical and rock accompaniment?

After Lancer and Assassin finished Yuki Kajiura took a moment to address the audience and give them a welcome respite: “Hello! Welcome to Anisong World Matsuri. Are you having fun? Great. I am sure that you are enjoying the beautiful song of three divas, Yuriko Kaida, Joelle, and Kaori. We are so glad to be here.”

We took a brief trip to the Sword Art Online universe with Longing (Sword Art Online -Ordinal Scale-). It was another epic piece that allowed all of the performers to flourish.

The audience was then transported to the .hack universe with the next two tracks, Key of the Twilight (.hack//SIGN) and Yasashii Yoake (.hack//SIGN). She took this time to introduce us to her band members, but unfortunately I wasn’t able to write them down at the time. Apologies.

We returned to the SAO universe once more with Luminous Sword (Sword Art Online -Ordinal Scale-). It was yet another epic track that gave the crowd a chance to sing along.

There was one final treat left in store, as Aimer returned to the stage. Aimer and Yuki Kajiura, along with her band, performed a rendition of Hana No Uta (Fate/Stay Night [Heaven’s Feel] I. Presage Flower). This was a special moment and a unique collaboration. Anisong World Matsuri and Anime Expo excel at creating such moments, but even by their standards this concert was on another level.

Afterwards I went up to the merch booth and it looked like they’d been mugged. Roughly half the board was pasted with “Sold out” stickers. The Yuji Kajiura merch I would recommend is FictionJunction 2008-2010 The Best of Yuki Kajimura LIVE and Fiction 2.

For more about these artists you can check out their websites: 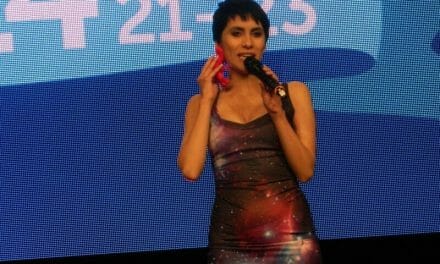 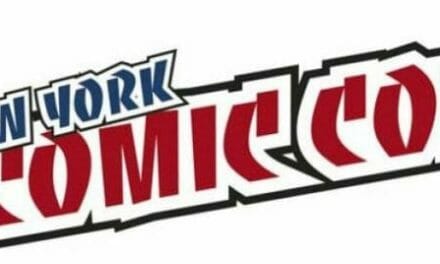 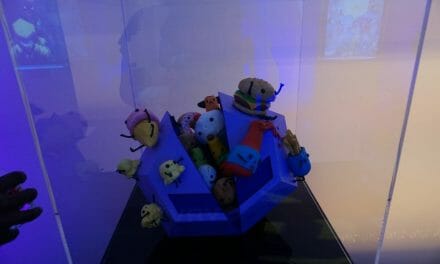 Kon’s Last Film Back In Production