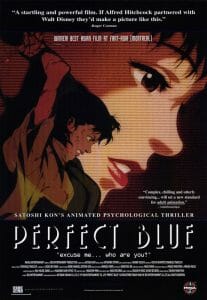 You’re not dreaming. This psychological masterpiece is coming back to theaters!

Earlier today, ticket seller Fandango updated with a listing for classic anime film Perfect Blue. According to Fandango, the film will receive a one-day screening on September 6. The listing notes that the movie will be presented in subtitled format.

Manga Entertainment released the title on VHS in 1999, and on DVD in 2000. The film has been out of print in North America since 2007, after Manga’s “Essence of Anime” release hit stores.

Pop Singer Mima Kirigoe looks forward to a bright new career when she quits her chart-topping trio to become an actress. When she lands a role in a sexually charged murder mystrey, MIma’s life begins to fall apart. Reality and hallucinations merge into a terrifying netherworld where innocence is lost and dreams become nightmares.

Quickly descinding into a dangerous state of paranoid delusions, Mima discovers Internet sites describing every intimate detail of her life. Helpless and afraid, she watches as her associates are threatened and killed by a mysterious stalker.

Source: Fandango (Thanks to L.B. Bryant and Yatta-tachi Editor-in-Chief Katy Castillo for the tips!