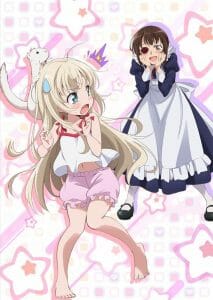 Earlier today, the official Uchi no Maid ga Uzasugiru! (Our Maid is Way Too Annoying!) anime website updated with details on the show’s theme songs.

Kanko Nakamura’s Uchi no Maid ga Uzasugiru! manga launched in the pages of Futabasha’s Gekkan Action magazine in 2016. The series currently spans two compiled volumes, with the most recent hitting stores in October. Volume 3 will ship to retailers on Thursday.

To that end she tries to get a job in the Takanashi household as a maid and babysitter to Yasuhiro Taknashi’s spoilt daughter Misha Takanashi, as it seems that her mother is no longer present.

Misha has successfully gotten rid of previous maids through playing delightful pranks like throwing mud, laying out banana peels to slip on and lighting the washed clothes on fire. In face of the newest applicant boasting that she has military experience, Misha even thinks about researching bomb making.