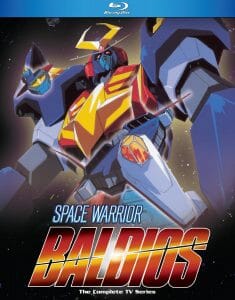 Next up, it’s Warriors! In! Space!

Earlier today, Discotek Media announced that they acquired the domestic rights to Space Warrior Baldios. The publisher will release the show on SD Blu-Ray in subtitled format.

The series received a compilation film in 1981, which Discotek currently releases in North America. They describe the title as:

From a poluded and destroyed planet called S-1 arrives an invasion on earth, Marin one of the people of S-1 helps the earthlings fighting the invaders with his super ship Baldios!

Instead of cleaning up their own nuclear waste, Planet S-1 brings their dirty work to Earth. Their military rulers want to knock us all off so their dying world can relocate here. Flying against fate, an S-1 rebel tries to defect to our side. But can a desperate and divided World Federation welcome him with open arms? Is this young Marine Leigan an ally or a spy? Can his robot ship Baldios and our Blue Strike Force unite to defeat The Red Fighters? And will it even matter if the impending doom arrives ahead of schedule? It’s space war fought on the environmental front. The ultimate battle for survival.