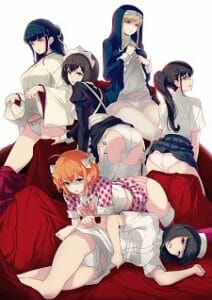 Earlier today, the official Iya na Kao Sare Nagara Opantsu Misete Moraitai (I Want You To Make a Disgusted Face and Show Me Your Underwear) website updated with the final OVA episode. The episode stars Haruka Yoshimura, who plays high school student Airi Sega who, as the title implies, gives a disgusted face, and shows her underwear to the camera.

The video is currently streaming on Niconico.

Series creator 40hara posted an illustration for the episode, which can be found on their Twitter account.

The visual and episode are both obviously Not safe for work!

Iya na Kao Sare Nagara Opantsu Misete Moraitai launched at Comiket 2017. At this year’s event, it was announced that the project will receive a second season.

Iya na Kao Sare Nagara Opantsu Misete Moraitai is based on the doujin of the same name by Shimahara. The project, which is firmly listed as an 18+ title, has more than 70,000 copies in print, which include manga, photo collections, and illustration collections.