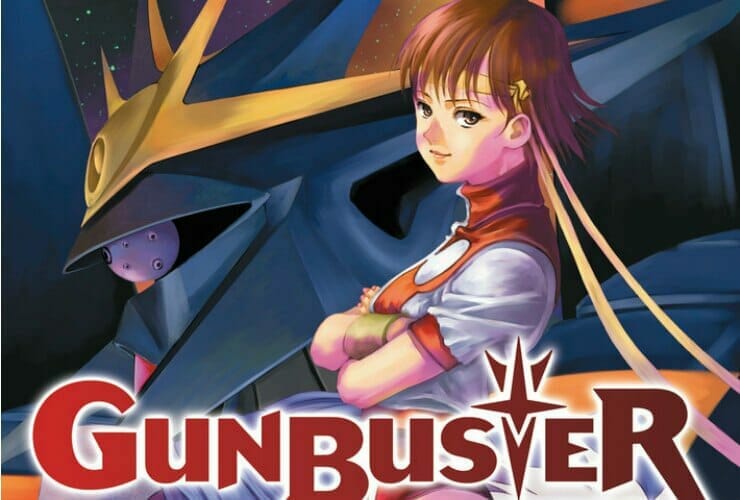 It looks like it’s time to aim for the top once again!

Gunbuster is an OVA franchise, which was created by Toshio Okada (Otaku no Video). The first series launched in 1988, with Hideaki Anno (Evangelion, Nadia: The Secret of Blue Water) directing the project and Toshiyuki Kubooka (Yamato 2520, Gunbuster vs Diebuster Aim for the Top! The GATTAI!! Movie) adapting Haruhiko Mikimoto’s character designs for animation. Okada wrote the screenplay.

The project was adapted to a feature film, which Maiden Japan releases in North America. They describe the title as:

There are monsters between the stars, alien nightmares determined to destroy the human race. Noriko Takaya was only a child when her father sacrificed his life to temporarily stop the alien’s advance. Now she’s training to pilot a giant robot. She’s not very good, however. Not until her coach suggests modeling herself after the schools best pilot, Kazumi Amano. Mastering the skills to reach the top transforms Noriko into both a rival and partner for Kazumi, who secretly loves their Coach, and a third fiery female joins the rivalry in the form of Soviet pilot Jung Freud. But their real adversary is time, as the faster-than-light travel required steals years on Earth for hours spent in flight. And that means that, even if they survive, the loved ones that Noriko, Kazumi, and Jung travel into space to defend may already have died before they return. Get ready for a major landmark in the history of animation as Studio Gainax, character designer Haruhiko Mikimoto (MACROSS), and director Hideaki Anno (EVANGELION) unleash the feature film version of GUNBUSTER!

In the future where space monsters invade the Sol System, a young girl named Nono has left her home behind, to come alone to the big city. She has a grand dream of becoming a space pilot. But reality is harsh, and she spends every day instead at the diner near the spaceport where she lives and works. That all changes the day she meets a real-life “Topless” pilot named Lal’C. Neither realize that the future of humanity rests on both of them!