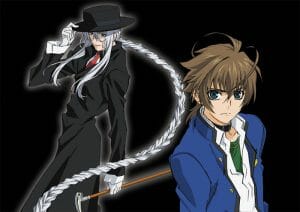 Some view the world in black and white, but never the many shades of grey…

HIDIVE announced that they acquired the streaming rights to Monochrome Factor for the United States, Canada, New Zealand, Australia, the UK, Ireland, and other select regions. The show will launch on HIDIVE starting October 17, with new episodes hitting the service on Wednesdays.

Maiden Japan announced that they picked up the home video rights to the series earlier this year.

High schooler Akira Nikaido is living a normal, predictable life. That changes when he meets a mysterious man, Shirogane, who tells him that beings from the Shadow World are invading the Human World. Shirogane asks Akira to become a “Shin,“ a creature from the Shadow World, to help him hunt down these invaders and restore balance. Add to that having to juggle school work, teenage drama and Shirogane’s feeling towards him, Akira now has plenty to keep him busy.