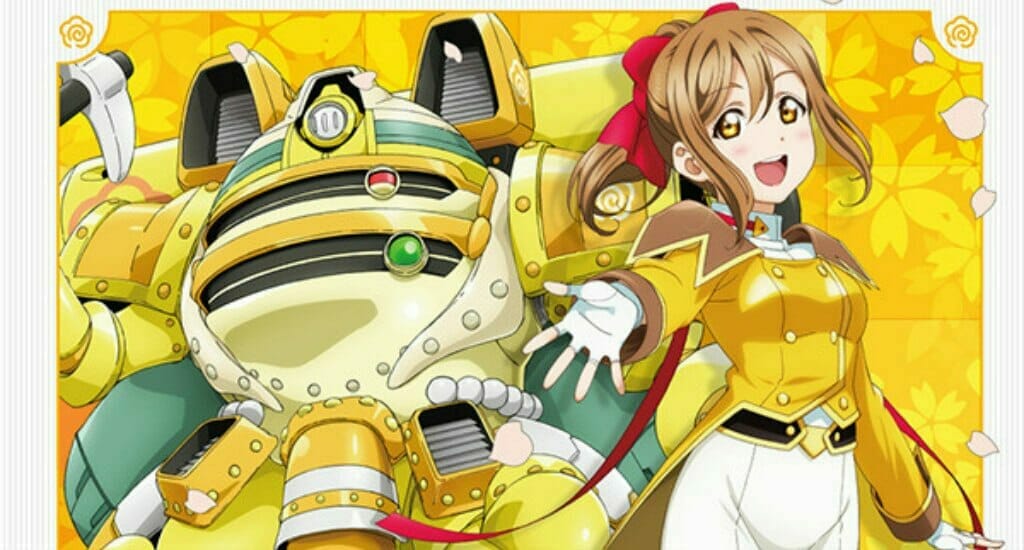 So, um… how… do we combine these mottos? “Aqours, sanjou!”? “Teikoku Kagekidan, Sunshine!”? Decisions, decisions…

Earlier today, Sega announced that they will host a collaboration campaign between their long-running Sakura Wars franchise, and Love Live! Sunshine!!. Sega will launch several initiatives that will run from October 27 through December 9, including:

Hanamaru will take center stage for the campaign, appearing in the Teikoku Kagekidan battle gear, alongside a Koubu mech that wields a pickaxe.

New illustrations of Hanamaru, as well as the Koubu were also revealed, which you can check out below.

Sega Game Center attendees across Japan will receive one of two postcards, depending on the dates in which they attend.

The first postcard features a front-facing shot of Hanamaru, who is standing before her Koubu. The scene is framed in a gold-colored border.

The image featurs a portrait shot of Hanamaru in her TeiGeki uniform, standing before the Ginza Imperial Theater and a Sega Game Center. Below her is a dialogue box, which reads “Maru to issho ni shutsugeki, zura!” (“Maru is joining the sortie, zura!”) The entire scene is presented in the style of a typical in-game Sakura Wars dialogue.

Players who spend 1,500 yen in UFO catcher machines will receive a rubber cell phone strap, which features one of the members of Aqours in TeiGeki battle gear.

Nine designs will be offered in all. Each of the Aqours members’ colors corresponds to those of a member of Sakura Wars‘ Teikoku Kagekidan (presented in parentheses):

Fans who spend 500 yen on UFO Catcher machines will receive a clear file, featuring one of the members of Aqours in TeiGeki battle gear, and standing alongside a Koubu. Eleven designs will be offered in all.

Two waves of UFO Catcher prizes will be offered through the campaign.

Unlike other merchandise items, these are not specifically related to Sakura Wars.

A collaboration café will open its doors on the seventh floor of Sega Akihabara 3rd store, and will run from October 27 through December 9. The café will serve food and drinks based on the cross-over. Several food and drink items have been shown off already, which you can check out below.

The image features Hanamaru with her Koubu, set against a faded pink background that resembles the gradient on the title screen from the first Sakura Wars game. Several cherry blossom petals flutter by, as the two are framed by a golden border.

Customers who purchase a meal will receive a plate holder, which features Hanamaru.

Customers who purchase a beverage will receive a free character coaster, which features one of the members of Aqours in TeiGeki battle gear.

Folks who buy a dessert will receive one of three parfait cup coasters, which features either the first year (left), second year (middle), or third year (right) members of Aqours.

Customers who spend more than 2,000 yen at the merchandise section will receive a free clear photo card. There are four designs in all: one for each class, as well as a full group shot.

Parfaits based on the first year (left), middle year (middle), and third year (right) members of Aqours will be offered, each of which will carry a 1,000 yen price tag.

Beverages based on each of the members of Aqours will be offered for 600 yen each.

Merchandise will be offered at the café in two waves, with each piece being available while supplies last, or until the end of the campaign.

Eleven designs will be offered, which will carry a 600 yen price tag.

Ten designs will be offered – one for each of the members of Aqours, plus one mystery design – which will each be priced at 540 yen.

The coaster holder will cost 1,000 yen. This first version will feature Hanamaru and her Koubu.

Two types of bromide holder will be offered, which will each cost 1,400 yen. One will feature Hanamaru, while the other will include all members of Aqours.

Three Kinchaku purse designs will be sold, each of which will be priced at 700 yen.

A second design for the coaster holder will hit the merch counters, which will carry a 1,000 yen price tag. This new version will include all members of Aqours.

Three designs for the large coaster holder will be offered: One will feature the Sakura Wars branding, while the other two will be general Aqours items. All three will cost 1,600 yen each.

Nine Double Coaster Holders will be offered, none of which will feature the Sakura Wars branding. These will cost 1,600 yen each.

A new Sakura Wars game is in the works, and tentatively slated to launch prior to March 31, 2019. The game, titled Shin Sakura Taisen, was unveiled on April 14, during the “Sega Fes” fan event.

Source: Twitter (SEGA_OFFICIAL), Crunchyroll  – Thanks to L.B. Bryant, Dawn (Anime Nostalgia Podcast), LettuceKitteh, and many others for the heads-up!