Samantha Ferreira: Hi everyone, and welcome to the Herald Anime Club! I’m Samantha, and I’m here with L.B. and Lydia.
L.B. Bryant: Hello!
Lydia Rivers: Hiiii everyone!
Samantha Ferreira: Tonight we’re back to talk up the third episode of Karakuri Circus: “The Child Abuse Episode”
L.B. Bryant: I’m sure this kid is going to get abused plenty more by the time this series is done
Lydia Rivers: In which the kiddo jumps through the same window we wanted to throw the creepy uncle! 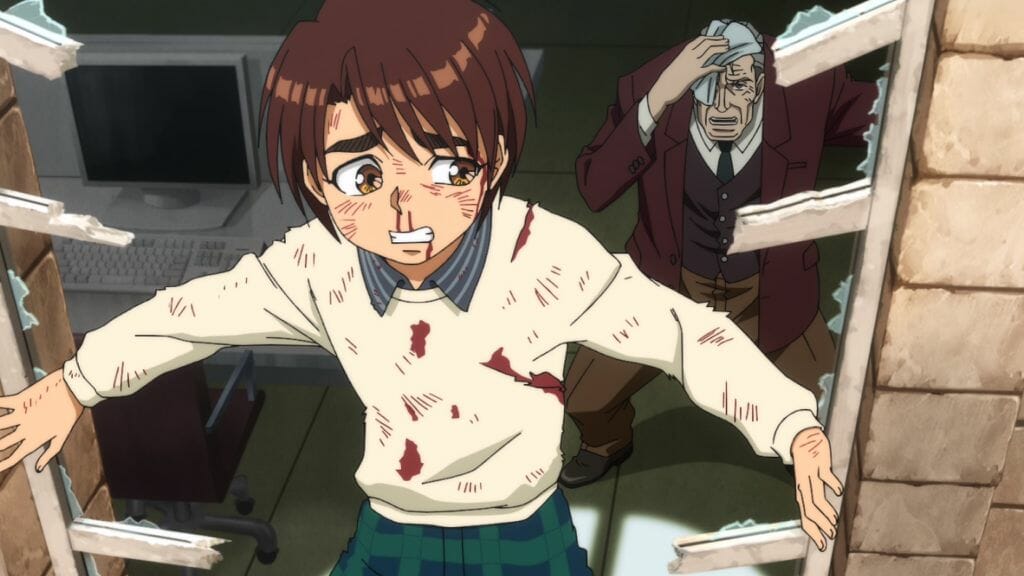 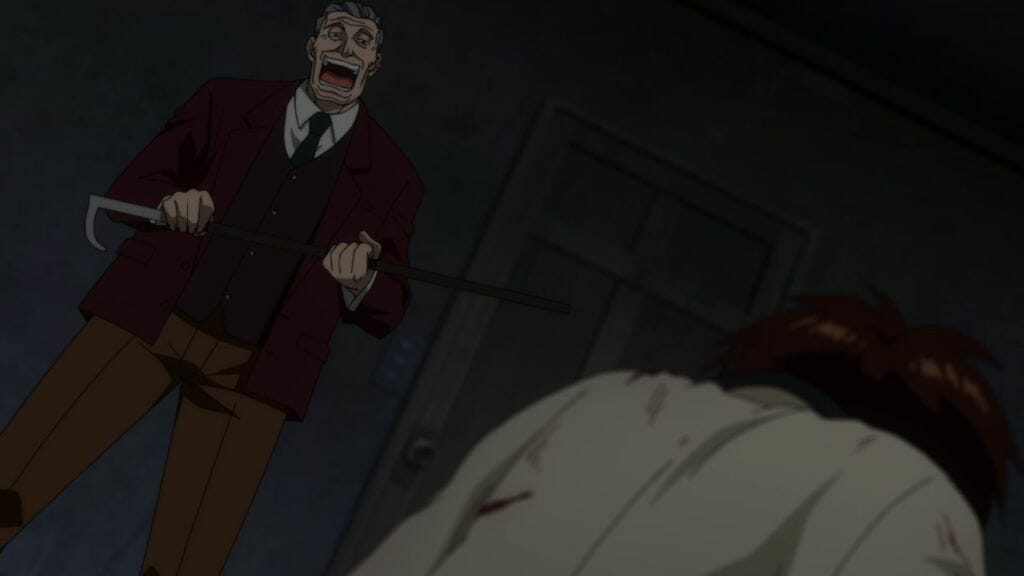 Lydia Rivers: HUGS. While we’re being real, I was like “man. That’s exactly what I wanted to do.” When he jumped, but not to die, to escape!
I used to wish I was in a cartoon so I could pull that stuff off, too!
Samantha Ferreira: Likewise!
I kind of liked how it ended – kid used all his rage to headbutt a murder puppeteer
Then stood up and hired the folks who were trying to kill him an episode before
Like…
Dag
Lydia Rivers: And then he was like “Switch to my side!” And chose to use the power he was given in life. Team Murder was like “….COMPELLING!”
Samantha Ferreira: Yeah! Like… “Well this kid got interesting”
Lydia Rivers: So now we have various kinds of abuse confirmed for character backgrounds, between the three of them. They are one little wreck of a family, and I love them all the more. Even though I’m an adult and I realize it’s playing out like a ten-year-old me’s fantasy, it’s not one I mind seeing.
Samantha Ferreira: Likewise.
God, poor Eleanore/Shirogane… she’s seen a lot, too
Lydia Rivers: That’s what I mean. Hers was a different kind of abuse, the one that negates one’s personhood and makes it so that a purpose is the only thing giving you inherent worth. 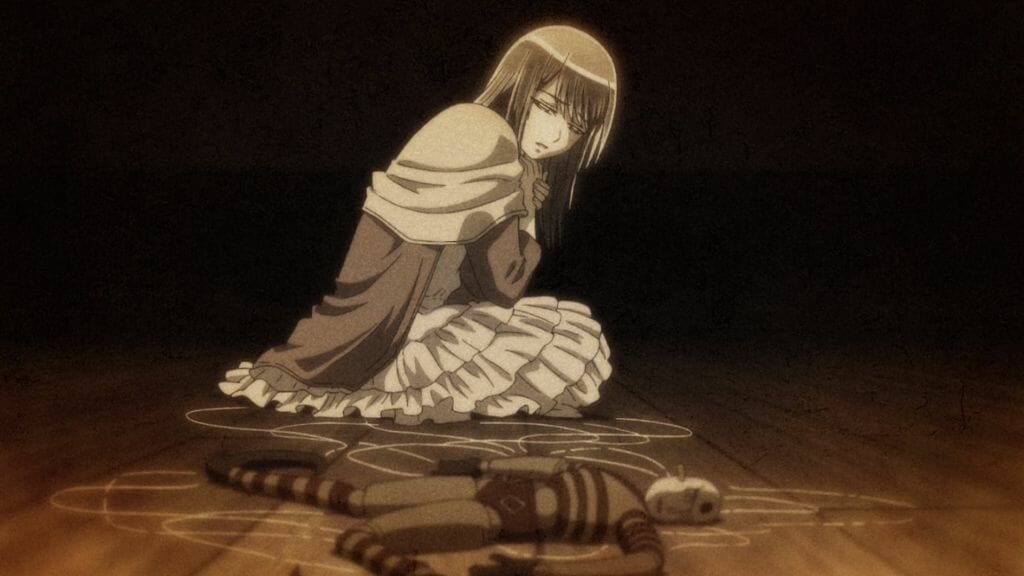 Samantha Ferreira: Indeed.
I was just remarking… like… it was astounding at how raw this episode got.
Lydia Rivers: It completely redeemed itself from last episode (which honestly should have been two)
Although I LOL’d at the mini-boss at the gate. So classic
Samantha Ferreira: That was great, lol
That said, we now have a literal murder-mansion filled with murder-puppets
Lydia Rivers: And the classic gangsters with a variety of katanas and improvised weapons
That one shot that panned across them
I totally LOL’d 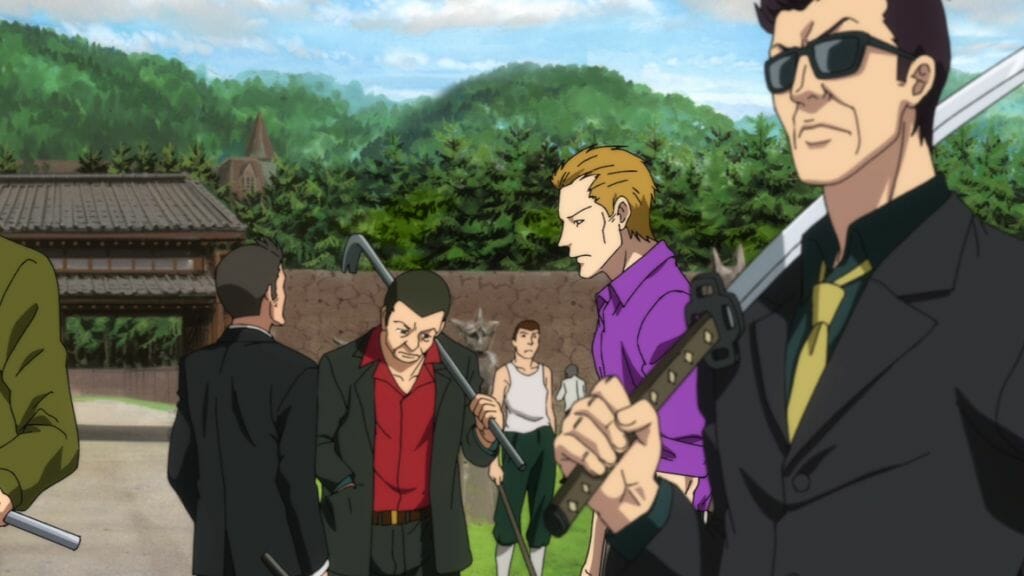 L.B. Bryant: What did you two think of when Masaru was hiding in that cupboard and just happened to stumble across his father’s writing? It felt like way too big of a coincidence to me.
Lydia Rivers: His uncle stole his mansion, that’s what I was thinking.
Samantha Ferreira: That’s my thought
Also: “The boy is just bait”, to clarify for the readers
It’s hard to say
I mean
The entire family so far, minus gramps, has been legitimately awful
I wouldn’t discount pops being a bad person who was using his kid to his own ends, like some overeager parent bullying his kids through peewee sports
“I can’t do this, so my kid will serve as the means to my end”
Lydia Rivers: I bet we see him framed as some kind of antihero who let himself be killed to start the ball rolling and end the puppet wars
L.B. Bryant: I totally buy the whole evil father who just wants to use the kid, it was just more that in that huge house the first place that Masaru hides has that exact book right there that he is totally able to read in the dark.
Lydia Rivers: Haha! Yeah, the scene was not subtle.
If we want, we can say he read by keyhole-light 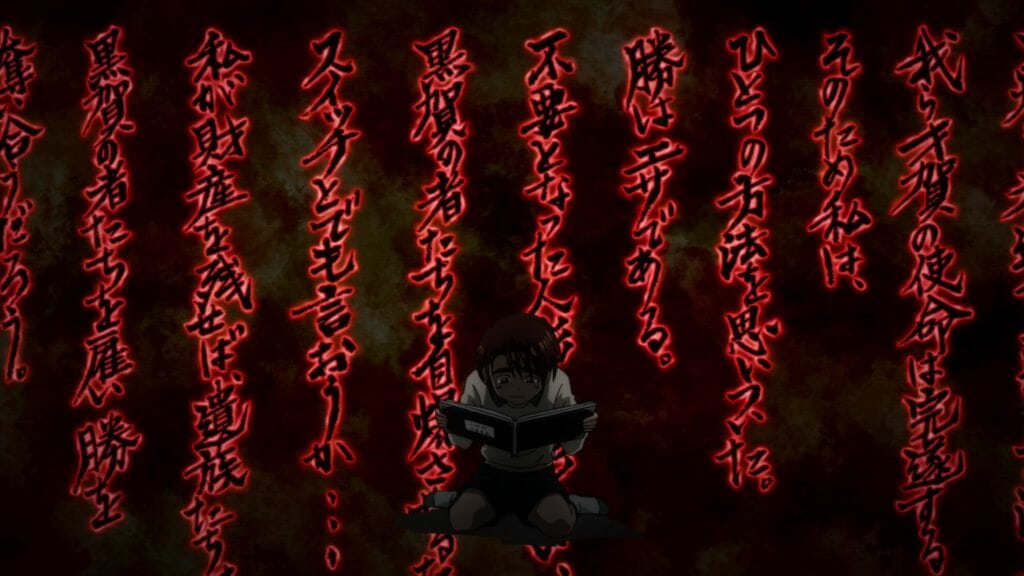 Samantha Ferreira: Indeed
You have to remember: This is a shonen title
It’s not meant to be anything close to subtle lol
Correction: A shonen title from 1997
Lydia Rivers: With…murder puppets! LOLOL
Samantha Ferreira: Exactly!
(Love those murder puppets)
Lydia Rivers: Aloquin best boy
He’ll be the Harry Potter of puppets after it’s all done. The puppet who lived
Samantha Ferreira: Yas!
On another note, we did see that this show isn’t afraid to straight-up murder the randos. I’m kind of amazed that we got two confirmed kills in the first act
Lydia Rivers: It’s true!
L.B. Bryant: They weren’t even killed neatly… one got blown up with her own brightly colored bombs 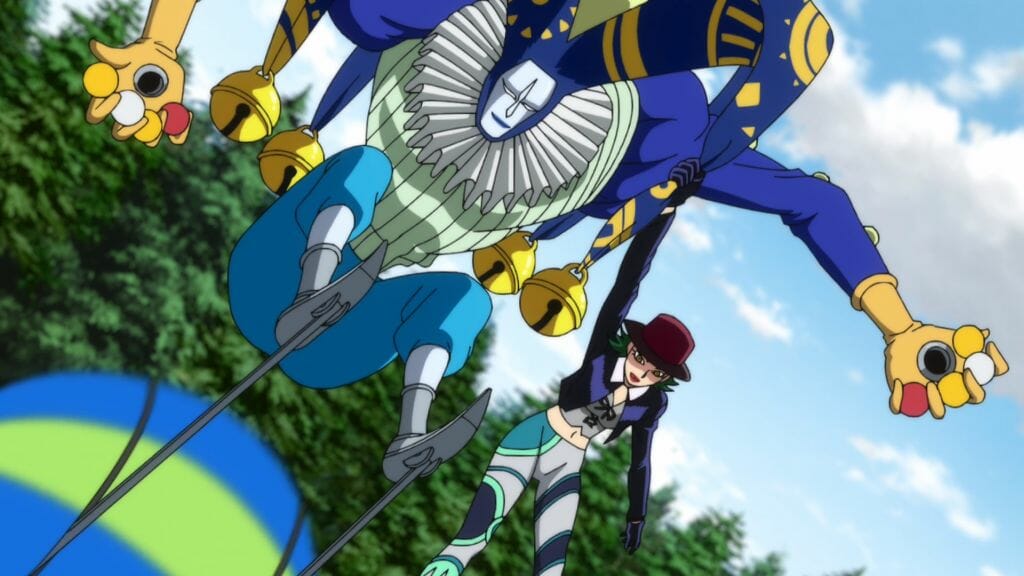 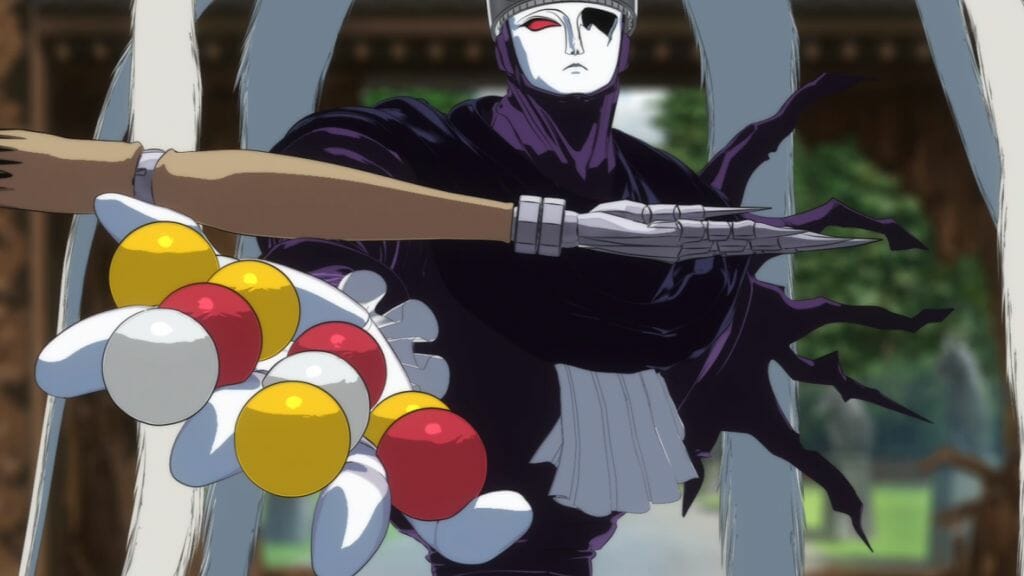 Lydia Rivers: I was expecting Narumi to go rescue the gate guy in high-handed morality, but he wasn’t that simple and I was happy with it.
Samantha Ferreira: I’m glad it went that way. Like… “They tried to kill your buddy, you know.” “Yeah… Fuck him, but I’m not gonna like it. :neutral_face: ”
Now, I’m getting ahead of myself – we’re forgetting one amazing detail. Shirogane is out of her Ronald McDonald leotard! :0
L.B. Bryant: Indeed
Lydia Rivers: Thank god.
I wasn’t vaguely enraged every time I looked at her
thinking to myself “Is this what bulls see when they see the color red?”
Samantha Ferreira: Hehe.
Also: On that note, there have been a lot of costume changes, now that I think about it
Masaru got new clothes, and Narumi got his gi 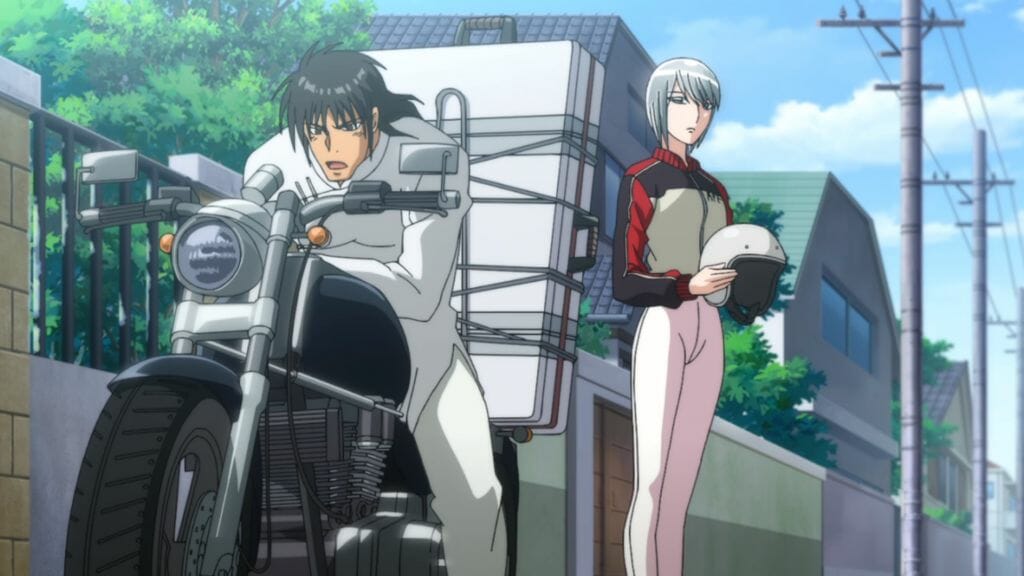 Lydia Rivers: Masa also got a new pair of eyes
L.B. Bryant: I actually kind of like that. One thing that irks me in anime is when we always see characters wearing the same outfit in every episode.
I remember years ago I praised Sister Princess… wait… where are you going? Hear me out! Anyways, I praised Sister Princess because one of the characters got a new hair style when the season changed to winter. That was amazing to me and it was such a small detail. I knew I could pull this back to relevancy eventually.
Lydia Rivers: I like how that was a block paragraph so we couldn’t actually leave without hearing you out.
L.B. Bryant: hehe I have skillz
Samantha Ferreira: Mad skillz
Lydia Rivers: That is called planning ahead, kids! We should all learn from LB
Samantha Ferreira: The more you know~!
But I do agree. I love the whole fact that they’re giving actual costume changes – it implies the characters are more than just static
Lydia Rivers: It also highlights what a pain changing character designs is in an industry that requires rapid deadlines
Samantha Ferreira: It does 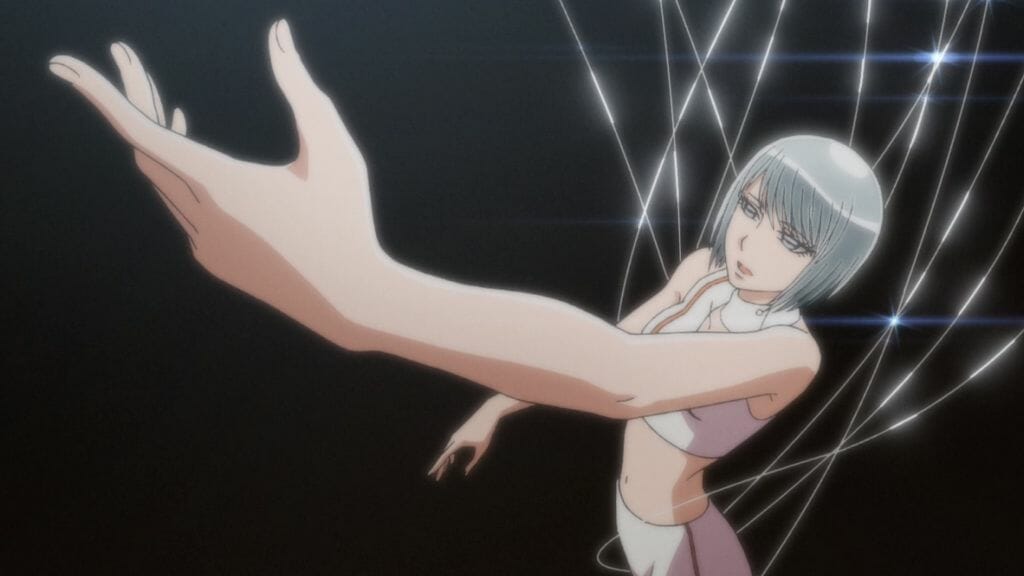 L.B. Bryant: And it’s honestly such a trope of shonen (think of how long Gon wore his uniform in Hunter x Hunter? What is the first color that comes to mind with Goku? etc, etc) that it might be one of the things that subconsciously bothers me most.
Lydia Rivers: Every time the mangaka changes something, they have to practice it that much before they can draw at speed again.
L.B. Bryant: I totally understand, doesn’t change how much it bothers me heh
Lydia Rivers: Their deadlines are just brutal, gosh. And yeah! It’s a shortcoming of the medium.
Samantha Ferreira: It totally is.
And it’s something that needs to be addressed sooner than later
L.B. Bryant: Yeah, I’m sure the shonen community is going to read this and get right on that. :)
Lydia Rivers: I think that’s one of the billions of reasons I adore Skip Beat. Even her facial features change slightly every time Kyoko gets a new role.
L.B. Bryant: You’re welcome for recommending that one to you :)
Lydia Rivers: There are only three shoujo/Josei manga on my top ten list, and that’s one of them
Samantha Ferreira: It’s so good
Lydia Rivers: Keeping company with Chihayafuru and Yona of the Dawn
Samantha Ferreira: True that
Though I’d also add Utena to mine
Anyway! We’re getting on a tangent, here.
Lydia Rivers: Tangent is our middle name! 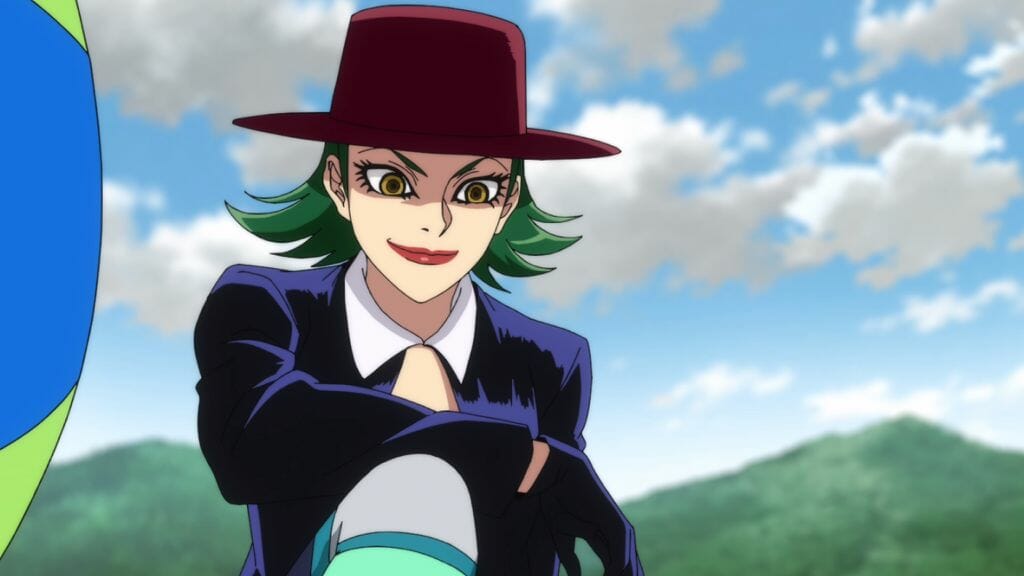 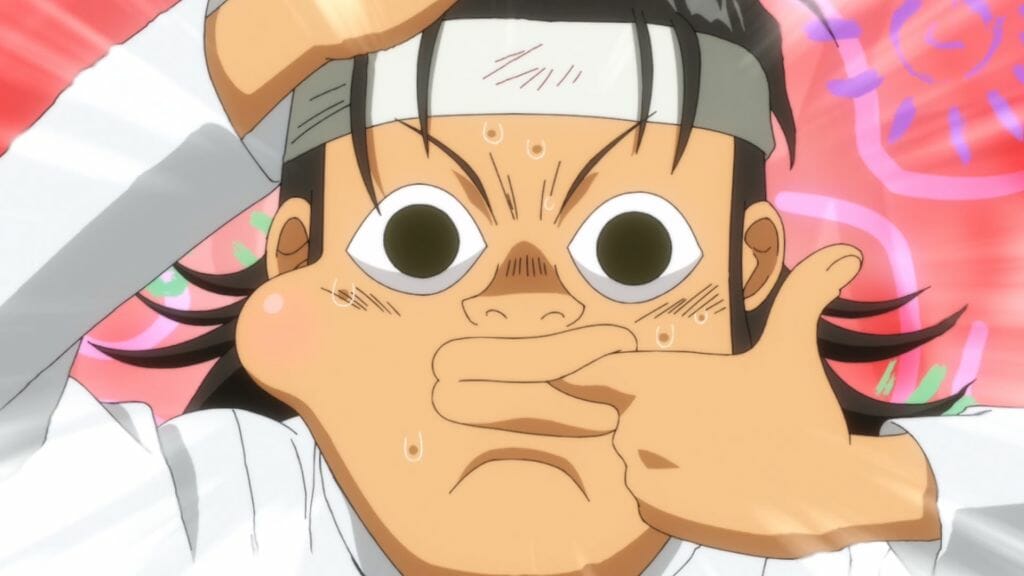