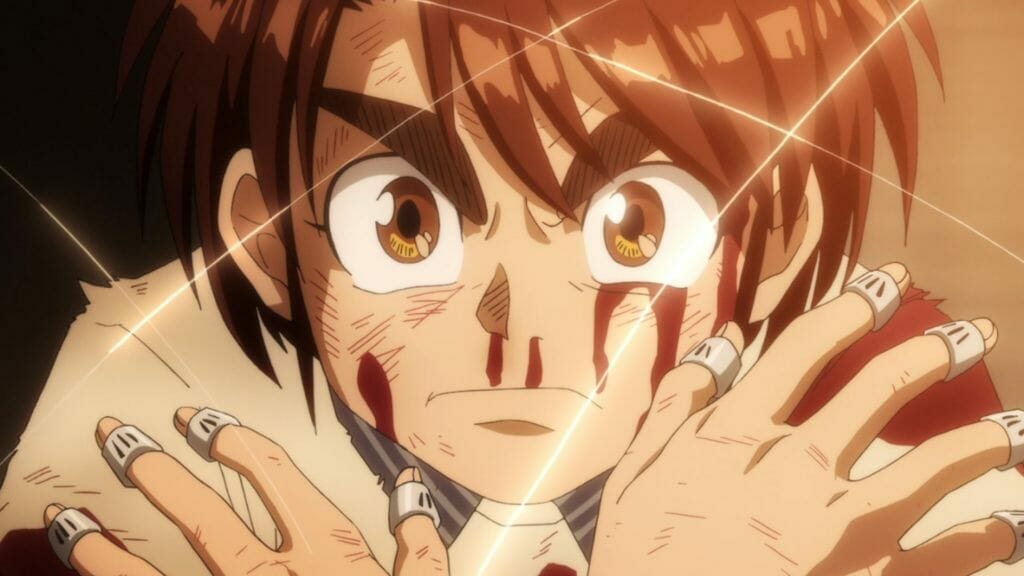 Samantha Ferreira: Hi everyone, and welcome to the Herald Anime Club! I’m Samantha, and I’m here with L.B. Bryant and Lydia Rivers.
L.B. Bryant: Hello!
Lydia Rivers: Hiiii everyone!
Samantha Ferreira: Tonight we’re back to the world of murder puppets and beautiful messes with Karakuri Circus. This evening, we’ll be talking about episode 4: “I have some questions!”
Lydia Rivers: You two might. I’m pretty sure I know exactly what happened.
Samantha Ferreira: Oh?
Lydia Rivers: Yeah, and I’m not a fan. Firstly, origin stories are legitimate before beginning the “main phase.”
Experiencing a main character’s defining moments is actually really neat. Or, you know, it could be.
I think this episode was the conclusion of such a thing. But how it was executed was…just…it totally blew it.
L.B. Bryant: I have been told on another Discord server that we haven’t gotten to the main story yet which caught my attention.
Samantha Ferreira: I was left more “What the hell just happened” than “Narumi’s gone. D:”
L.B. Bryant: That was one of the dumbest death scenes I’ve ever seen from an anime IMO.
Lydia Rivers: I can’t even care that he’s gone because he left during such a ridiculous scene.
Samantha Ferreira: I was more confused that all that remained was a BIG BEEFY ARM AND THAT’S IT
Like
Holy shit

Lydia Rivers: His final words were so good, too. But I was sitting there going “are you serious right now?” AND THEN THE FUCKING ARM
L.B. Bryant: And that BIG BEEFY ARM had magic powers that kept the kid from dying of smoke inhalation.
Lydia Rivers: Excuse my language, it’s just that I can’t find any appropriate words lol
AND HEAT
Samantha Ferreira: Yes!
I think my reaction was specifically rushing into this chat to scream “WHAT THE FUCK”
Lydia Rivers: I know that it’s a show about murder puppets, but that was too far gone.
L.B. Bryant: Like I said, dumbest death scene I’ve seen in a VERY long time.
Samantha Ferreira: It was SO GOOD up to that point, too! Like… they were hitting the emotional notes, the character building!
Then “ARM =D”
Lydia Rivers: We already knew he was cool. It was so unnecessary. And I was already pissed about how they handled the intimate little moment in the elevator cage.
Samantha Ferreira: Exactly

Lydia Rivers: It was great until after he hugged her. We should have just seen her flashbacks and not much else. I was so sure that she was being built up to be the flower in his cap, just like Asuna and fucking Kirito.
At least Narumi had a couple flaws.
Anyway!
I’m pretty disgusted.
Whoever engineered that scene has never had a panic attack before. “Your arm smells nice :D”
Samantha Ferreira: Exactly!
It’s like… that’s… not how it works
Lydia Rivers: “I mean, it smells nice because it’s warm :D”
Samantha Ferreira: The stench from Narumi’s arm cures panic attacks. Got it.
Keep that arm, Masaru – you have a miracle cure
Lydia Rivers: I can’t take it lmao
We might as well get that ridiculous.

Lydia Rivers: That would have been better. To see the kid decide to run out after Narumi saved his butt. Then his charred corpse later or something. Then we’d know for sure.
Samantha Ferreira: Exactly!
God.. If this wasn’t made a decade before Gurren Lagann, I’d say they were trying to turn him into Kamina, but… no – THIS IS PROTO-KAMINA, FOLKS
Lydia Rivers: KAMINA WAS DONE RIGHT
Samantha Ferreira: EXACTLY!
WHY ARE WE YELLING!
Lydia Rivers: BECAUSE WE HAVE 30 EPISODES OF NOT KNOWING WHETHER THIS SHOW IS GONNA BE GOOD OR THROW US A STANKY MAGICAL SEVERED ARM
Samantha Ferreira: Gooood.
Then we have Masaru’s “I can be a master puppeteer by sight alone”
which was a leap

Lydia Rivers: Yeah, we’ll see if he gets to be the Mary Sue I was so happy we avoided
At this point, I’m expecting whatever
Samantha Ferreira: I hope not… I loved how they were broken messes of characters that made stuff work
Lydia Rivers: Yep.
Samantha Ferreira: Now… it’s just…
I dunno.
Like… I genuinely liked the whole “I’ll pay you guys who tried to kill me” bit, and I loved how the guy went to bat at that point
Like… “he’s cheating you.” – Bam – I liked that
Lydia Rivers: That was definitely my favorite part. I was really looking forward to that, too.
Samantha Ferreira: Same. Like..
We had two episodes here
One was great
The other was just this hilariously stupid mess
Lydia Rivers: Two hits, two misses for me total.
Next episode is probably going to be part mourning. They have an arm to bury. And then, as if he hadn’t already decided, Masa will start his crazy training montage
L.B. Bryant: *Cues up Eye of the Tiger*
Samantha Ferreira: You sure they won’t keep the arm as a magical talisman that talks to them at this point?

Lydia Rivers: Ok, I’m done haha.
Samantha Ferreira: Haha, same… Just… ahgh. As the studio who did “I Want to Eat Your Pancreas” and Ushio & Tora, I expected better from Voln
Lydia Rivers: ^-^;;;
I can’t say I disagreeeeeee
Apparently I’m not done whining after all, I’m still typing out my elongated vowels.
Samantha Ferreira: Hehehe
I’m not mad, just disappointed.
Lydia Rivers: It’s just evidence of how tickled we were by this bizarre show. 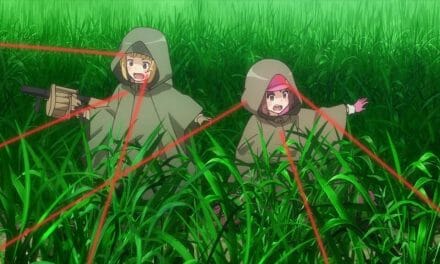 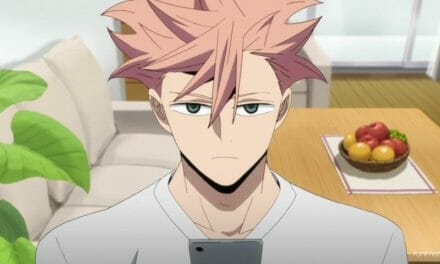