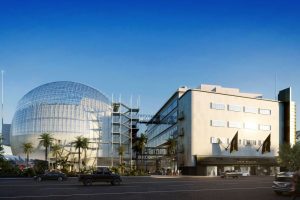 Earlier today, the Academy Museum of Motion Pictures (Academy Museum, henceforth) announced their plans for their grand opening in 2019. In their announcement, facility spokespeople stated that the $388 million facility aims to become “the first institution of its scope and scale devoted to the past, present, and future of cinema.”

Museum director Kerry Brougher revealed that, among other exhibits, the Academy Museum will also open with a temporary exhibition that commemorates the work of iconic anime creator Hayao Miyazaki. The display will be the first major exhibition of Miyazaki’s work in the United States, and presented in cooperation with Studio Ghibli.

Following the Miyazaki display, the Academy Museum will host “Regeneration: Black Cinema 1900–1970” in Fall 2019, which celebrates the under-represented history and contributions of African-American filmmakers to American cinema as a whole. The exhibit will trace from the beginning of the motion picture era, to a period shortly following the Civil Rights era.

The Academy Museum of Motion Pictures was first announced in 2017. The 300,000 square-foot campus was designed by Pritzker-prize winning Renzo Piano, and is the United States’ first major museum dedicted to the art, craft, business, history, and science of film.

Hayao Miyazaki officially retired from feature filmmaking in 2013. In November 2016, we reported that Miyazaki expressed a desire to return to movie production. In NHK special Owaranai Hito Miyazaki Hayao (The Man Who Is Not Done: Hayao Miyazaki), it was revealed that Miyazaki was working on CGI short Kemushi no Boro. He wasn’t satisfied with the format, though, and presented a project proposal for a feature-length film in August 2016.

In May 2017, Studio Ghibli put out a hiring call for new background artists and in-between animators for the feature. In February, we reported that Miyazaki was doing prep work for a new feature film, with the aim of having it in theaters by the 2020 Olympics. Studio Ghibli co-founder Toshio Suzuki noted at the time that “[r]ight now in Tokyo, he’s putting all his effort into making it [the feature].”

Kemushi no Boro made its debut at the Studio Ghibli Museum on March 21.

Miyazaki’s final film will be titled Kimi-tachi wa dou Ikiru ka? (How Are You Living?), and shares its title with a book by Genzaburo Yoshino. According to Toshio Suzuki, the film will be an action-adventure fantasy film.

Source: Deadline (Thanks to an anonymous tipster for the heads-up!)