Earlier today, the official website for the Children of the Sea (Kaiju no Kodomo) anime film updated with a new visual, plus four new cast members.

The image features one of the characters standing in a mysterious aquarium. Behind her, a scene of two characters swimming with sea creatures can be seen, as the column of water extends toward the starry heavens. A visual featuring the characters was also revealed, which you can check out below. 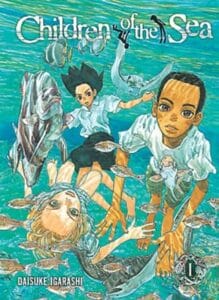