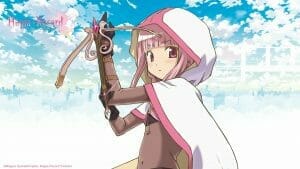 Aniplex of America announced that they will release Magia Record: Puella Magi Madoka Magica Side Story in the United States and Canada. The publisher will partner with developer f4samurai to release the title, which launches in Summer 2019.

Aniplex describes the game as:

The stage is set in a burgeoning city called Kamihama.
Magical Girls are drawn there as if by some mysterious force.
Iroha Tamaki is one of them.
“Hey, Ui…. Why did you disappear?”
A new story about Magical Girls and the wishes that drive them unfolds…

We are thrilled to be working with f4samurai to bring Magia Record: Puella Magi Madoka Magica Side Story to the U.S. and Canada […] As a tent pole within the magical girl genre, Madoka has had an impact on many anime fans throughout the years and we hope fans enjoy meeting Iroha and the other Magical Girls of Kamihama City through this mobile game.

The title itself is a spinoff of Madoka Magica, which revolves around new character Iroha Tamaki, who lives in Kamihama. Iroha enters a contract to become a magical girl, with her wish being to save her sister from an unspecified illness. Not long after, Madoka Kaname arrives in Kamihama with the goal of finding her lost friend Homura.