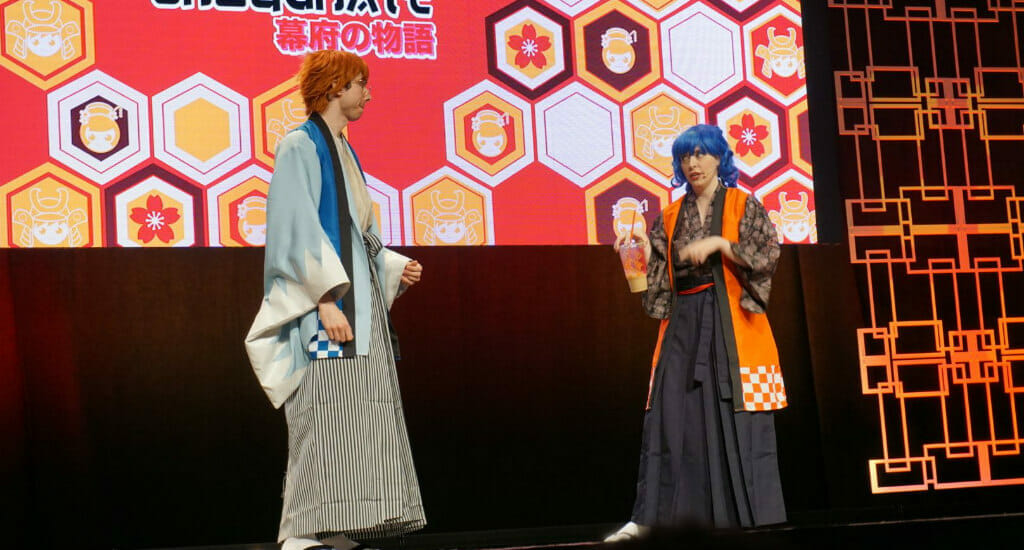 I quickly settled into my seat, as the room began its normal seating ritual. One by one, people filed in, to fill up the room’s hundreds of vacant seats. As people made their way in, the screens began to cycle through text games, to get people hyped up. The traditional favorites of “Win, Lose, Or Banana” and “Choose Your Own Adventure” were both accounted for.

This year, the Choose Your Own Adventure game, titled “Feudal Lords… Oh, My!” was firmly within the theme of the event. As the 10:30AM start time drew near, short interludes by Info T. Bot, the convention’s information-dispensing mechanical mascot, began to host light-hearted interludes packed with what can only be described as “dad jokes.” 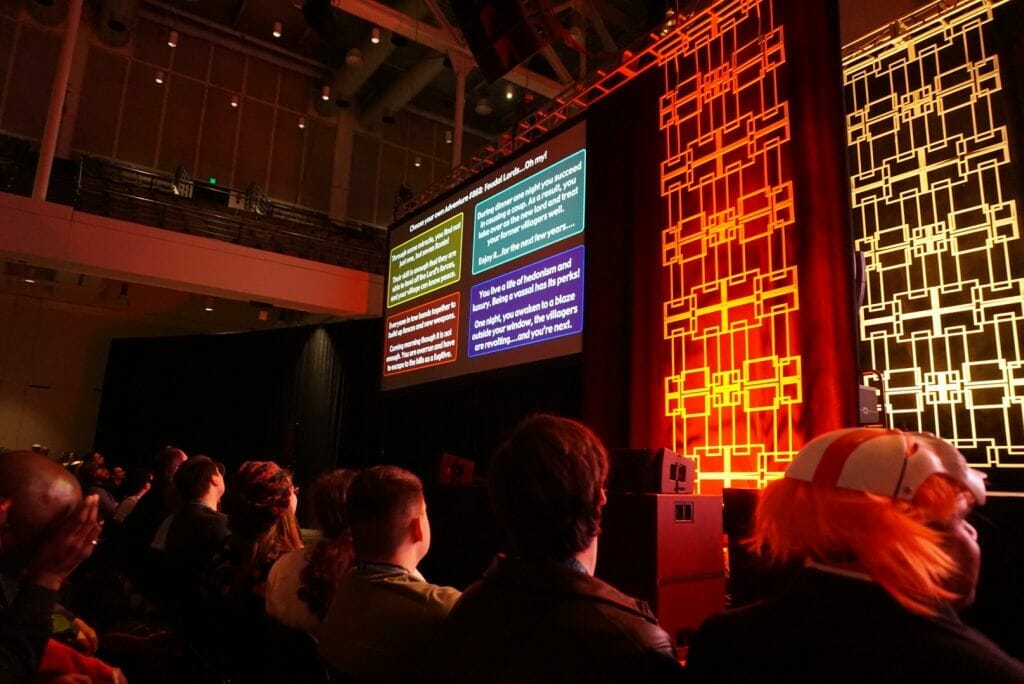 As the clock struck 10:30, the room darkened and the crowd erupted in cheers. The safety message played, this time delivering the usual warnings over dubbed footage from samurai flicks. Once it concluded, perennial mascot B-kun took the stage to kick off the cosplot. This year, he played a Shinsengumi warrior, who was searching for A-chan, though for some reason, he couldn’t find her. (Shock!) 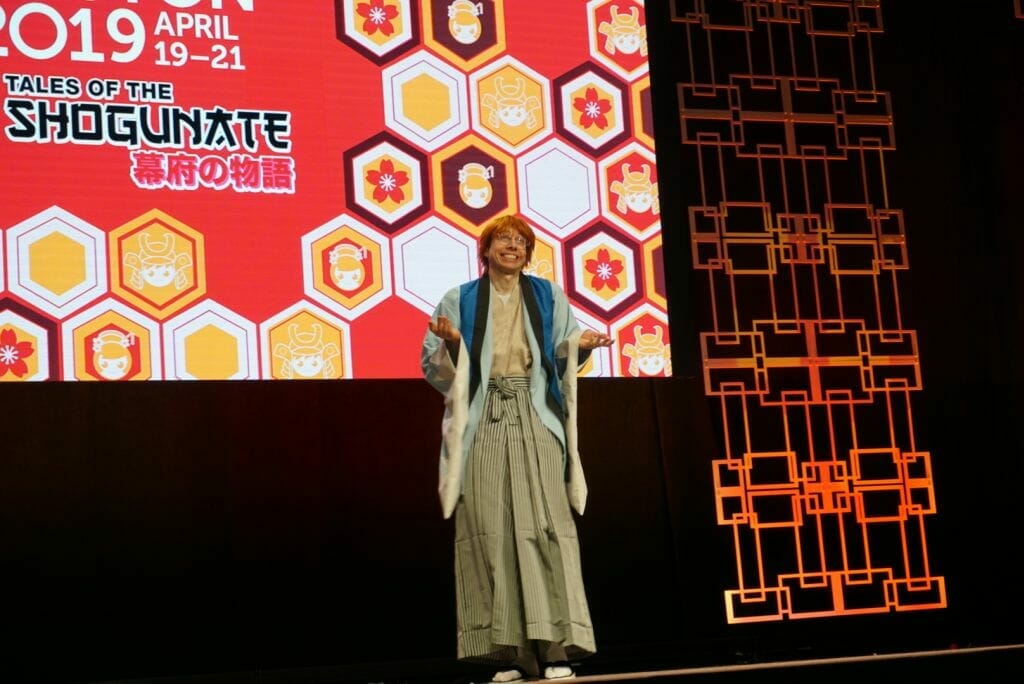 A few moments later, A-chan, who was cast as a ronin this time around, strolled onto the scene with an extra-large Dunkin’ Iced Coffee. 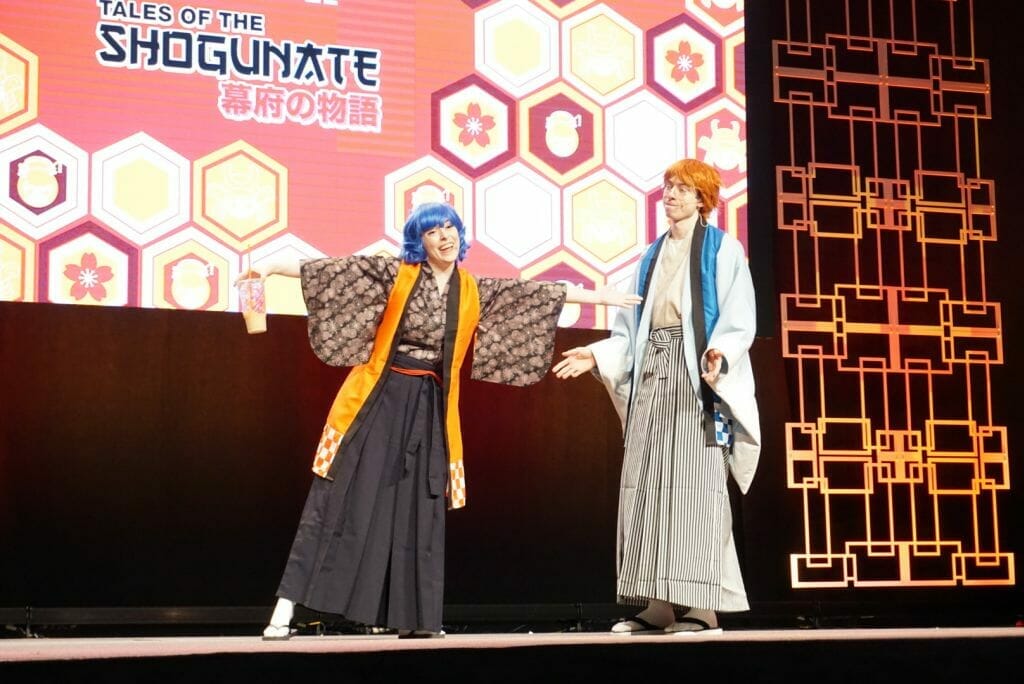 The two traded barbs and make a few wisecracks at each others’ expense (okay, mostly at B-kun’s expense), before introducing convention chair Kristen Leiding and vice chair Jenna Leary. Leiding and Leary quickly took the stage, wasting no time as they went over the usual safety rules, as well as the “5-2-1” rule (five hours of sleep, two meals, one shower) that everyone should be following over the course of the weekend. 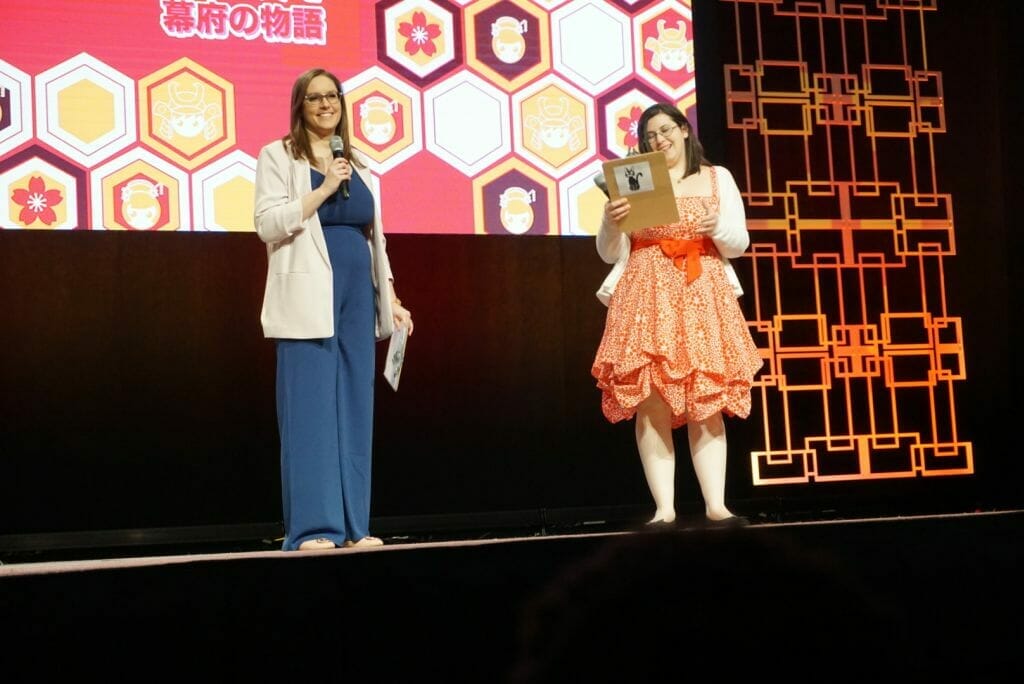 From there, the two discussed the general staff highlights, before running down the sponsors for the event. The list of underwriters felt like a parade of power-hitters as names like Crunchyroll, Funimation, and GKIDS flipped across the giant screen behind them.

After the sponsor messages were finished, the room went dark, as a message from Japanese Minsiter of Cool Japan Takuya Hirai began to play. He opened the short greeting dressed as Neon Genesis Evangelion‘s Gendo Ikari, before switching a more formal message. 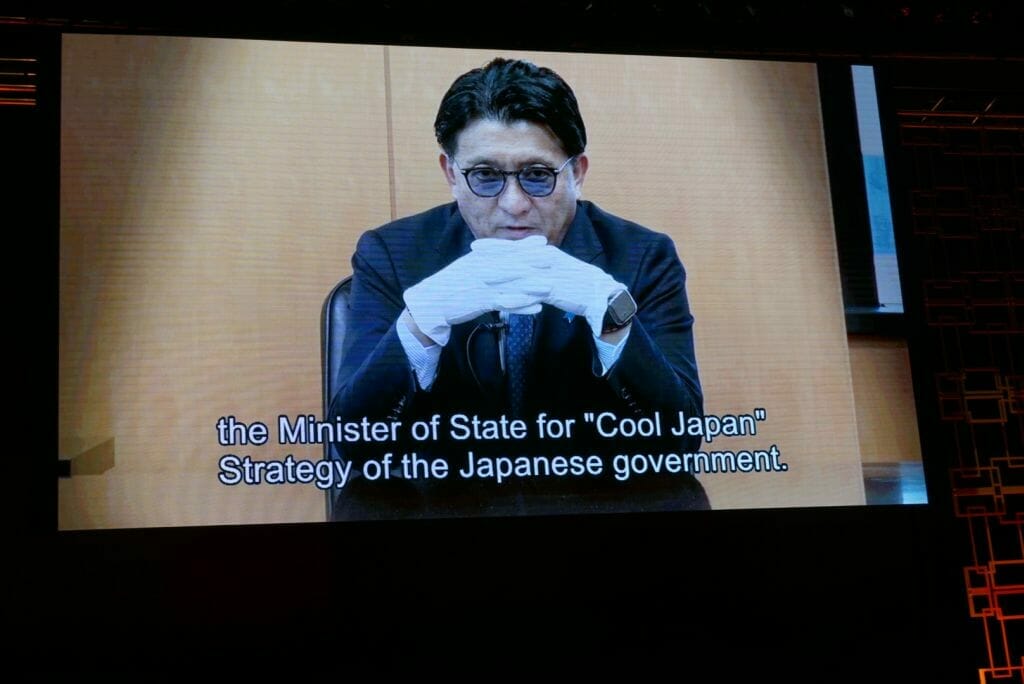 With the formalities out of the way, it was time for the guests. One by one, each of the conovention’s seventeen confirmed guests made their way to the stage to greet the hundreds of cheering fans.

Before Greg Ayres took the stage, Patrick Delahanty took the stage to offer an introduction. This was Ayres’ fifteenth consecutive year attending Anime Boston, and he was as much a part of its history as the staffers and the Hynes, itself. Delahanty presented Ayres with a fifteen-year pin to commemorate the occasion.

Goh Wakabayashi was unable to make it to the convention in time for Opening Ceremonies.

With the guest introductions complete, Leiding and Leary took the stage once more. They took a moment to promote the big premieres for the weekend, which would include City Hunter: Shinjuku Private Eyes and Code Geass: Lelouch of the Re;surrection. They highlighted the the charity auction that would benefit the Central Massachusetts Chapter of the National Multiple Sclerosis Society, and gave one final reminder of the “5-2-1 Rule.”

As they finished their greetings, the crowd began its exodus into the Hynes. Anime Boston was officially on, and this party wasn’t about to stop any time soon. 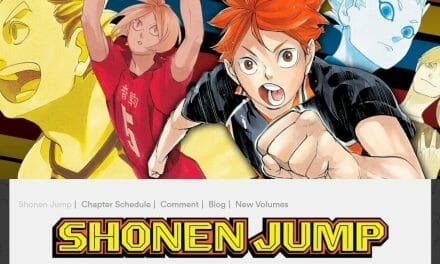 Anime Expo 2011: The Biggest Show Around