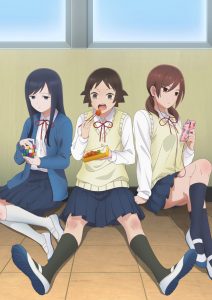 Wasteful Days of High School Girls will air in July. One day out of boredom, Tanaka decided to give her classmates nicknames based on their quirks. Her friend Sakuchi became “Ota” for her nerdy interests, and her other friend Saginomiya became “Robo” because of her expressionless personality. In retaliation, her friends decided to name Tanaka “Baka”. These are the ridiculous days of three high school friends claiming (or not) the height of their youth.