On June 7, Netflix started streaming a new trailer for the upcoming second season of Aggretsuko. The 100-second promo previews the seasons’s English dub.

Aggretsuko‘s second season will launch on their platform on June 14. Like the first season, the title will be presented as a Netflix Original.

Rarecho will return to direct and write the new season. 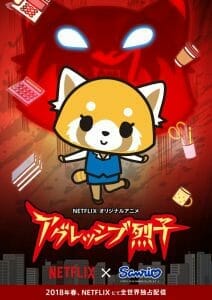 Netflix describes the new season as:

The first season of the Aggretsuko anime launched on April 20.