Apparently, even the Matsuno brothers float, down here.

Earlier today, Warner Brothers revealed a cross-over visual for Eiga no Osomatsu-san (Mr. Osomatsu The Movie) and IT / IT: The End. The visual features the Matsuno brothers and Totoko, eagerly accepting balloons from Pennywise the Clown. The group stands before a creepy funhouse, as the unfortunate Chibita sis trapped in one of the balloons. 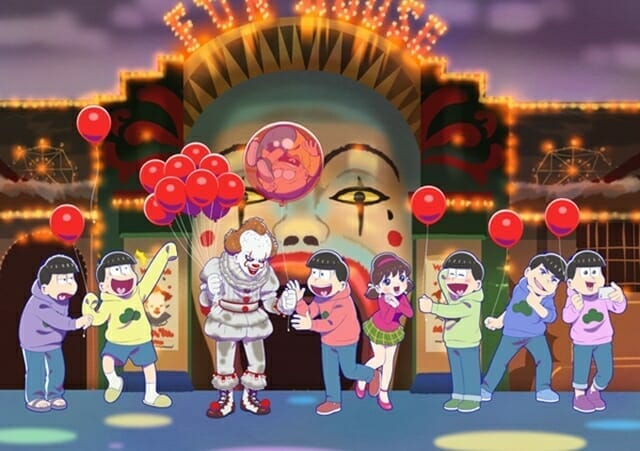 According to Animate Times, a collaborative video between the two properties is also being produced.

In the film, the Matsuno brothers attend their high school reunion, where they discover that all of their former classmates have grown into honest-to-goodness adults with corporate jobs and actual futures. Rather than face reality, the sextuplets drown their sorrows in booze, before heading home and passing out. When they awaken, they notice that something is “off”, and find that they somehow wound up in the past. Now, the Matsuno brothers must find their 18-year-old selves to discover the truth of what is going on.